Jacob ladder and a new Leaders and Enders

So I caved and started something new!  Its a golden rule, if I have the urge to sew, I go with it! Honestly I have no idea where this is going!  This is a Jacobs Ladder block.  I am using three different fabrics, two for the HST and one for the four patches.  All these fabrics were part of a story pack I got as a prize.  The pretty and floral prints are not my thing, but I have had a fair crack at using them in another project, so just trying to coordinator what I have left. 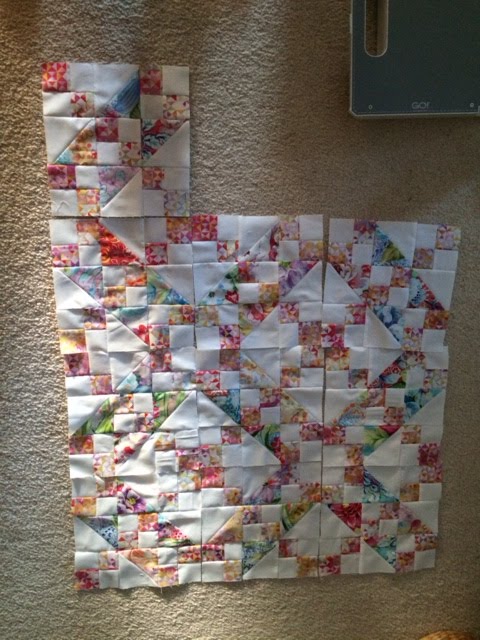 These are all the blocks together, not in the best light, but it was the end of a long day!  I am hoping that that I might get a small lap quilt out of this, but we will see....planning is not my strength! 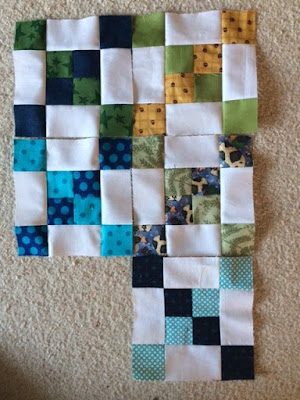 While I was about starting new projects (LOL) I started the Bonnie Hunter new leaders and enders block.  This is the perfect L&E block in my opinion, just rectangles and squares, with minimal neutral.  Having said that trying to find four squares that are the same fabric in my my depleted scrap collection is hard.  So I have had to go back to the scrap bucket and cut more scraps in this sizq.  No drama, just need to seriously consider a scrap 16 patch or similar to use all those singular scrap squares.  Happy quilting Sue.
at August 28, 2020 4 comments:

I am not pleased with the new Blogger interface.  I find it just freezes on my screen, no idea why, everything worked fine once I had reverted to the old interface.  Anyway, that aside I havent had a lot to blog about as working full time, home schooling, domestic chores etc all reduced my sewing output.  But here is a snippet of what I have achieved.  And just a heads up if I disappear from blog land you can still find me on Instagram (ahernsue) - a different sort of fun, that is more time friendly. 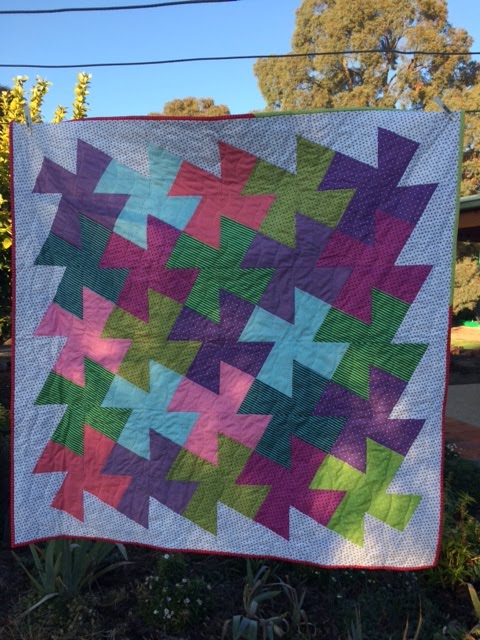 Finally a binding finish!  Its winter and has been cold, but it has taken me ages to finish hand stitching the binding down on this lap size quilt.  These fabrics were left over from a project finished many years ago and it was great to be able to use them together again.  I was very lucky that a friend Denise quilted this for me - she is a great supporter of Very Snuggly Quilts and is a great quilter. 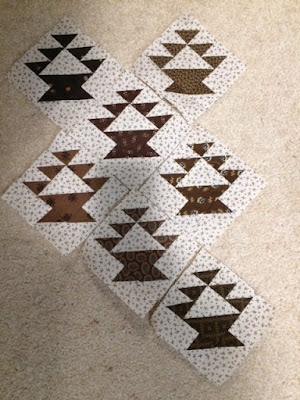 Temecula Quilt Co have had a free basket pattern on Instagram.  I held off and held off, then caved!  For some reason I wanted to use brown fabrics (not my favourite colour).  I had fun making these little baskets, but now not sure where to go from here.  That has been a common problem this year, starting mini blocks but not making them into a quilt.  I have decided that I need to drag them all out and try and see if I can make some interesting sampler style minis or just get enthusiastic to make enough blocks to turn them into something usable like a table runner.
Happy quilting Sue.
at August 24, 2020 3 comments: 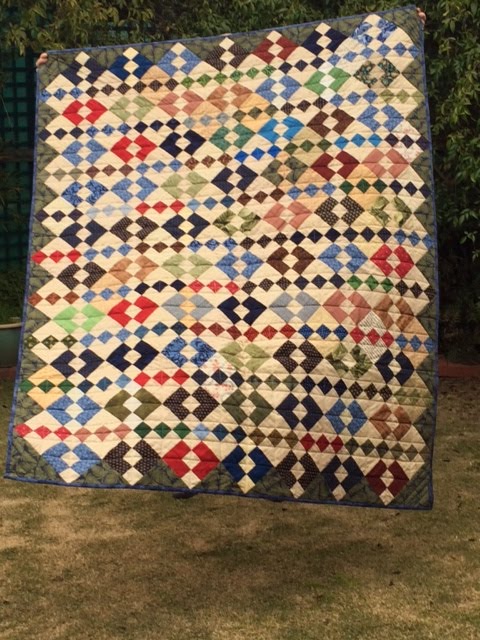 Carolina Chain quilt finished!  Pattern by Bonnie Hunter in her book Addicted to Scraps.  Made initially as leaders and enders blocks, then pieced specifically to try and get the top to a decent size. 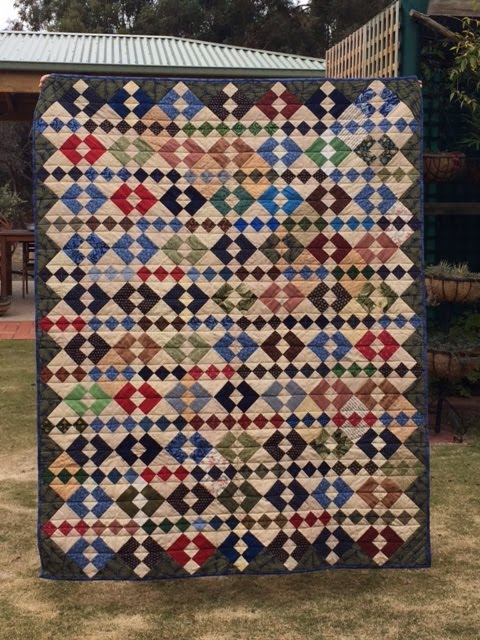 Quilted by me, using straight lines through the block centres and stitch in the ditch.  This is the second version of this pattern I have made and includes all the murky and country toned prints and cream to tan background prints - the first version had white clear based backgrounds and bright fabrics.  Another version is underway!  I find that working full time doesn't leave me with enough metal energy to sew anything difficult and this pattern just fills the need to mindlessly sew - not had to unpick once, its that easy!
Happy quilting Sue.

Mild level of panic when hubby announces that DS2 snuggle quilt for the couch is too small and bit young for him.  DS2 is turning 12 in June and I really panic when I realise that I have NEVER made him a bed size quilt.  In fact his snuggle couch quilt was made by his grandmother. Luckily hubby was straight to the point, he likes tennis so can you make him a tennis themed quilt! 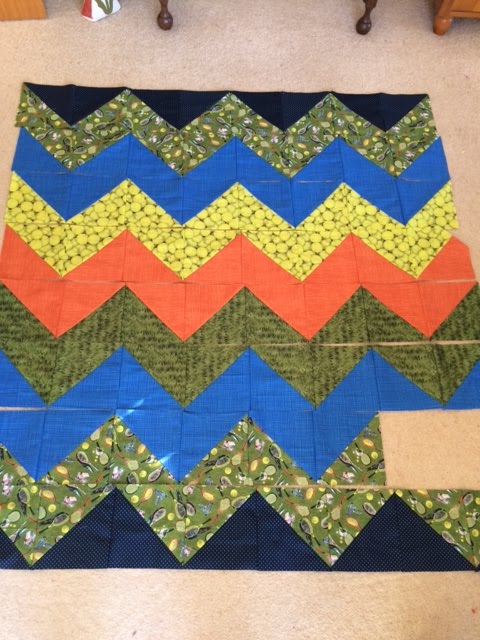 Phew, now I have a idea for a quick quilt and the not so local quilt shop, I have discovered has great novelty fabric range, so after a little bit of googling and some messaging and a parcel of tennis themed fabric is on its way.  In the meantime I drafted a pattern (stuffed up maths) and when fabric arrived I started cutting and sewing.
Opps.  Stuffed up the math, sort by one 8.5" square :(
In the meantime I got a full time job!  But as I am now working a 30 minute drive from the "local" patchwork shop (instead of a 1.5 hr drive), she arranged to have her daughter deliver my extra fabric on her way to work so I didn't need to pay postage, sounded like a good idea.  Except it took all week to arrive and when I did get the message I had to pick it up at the butchers!  LOL it was bad enough having to tell my new employer that I was expecting a private parcel to be delivered to work, then I had to ask where the butcher was located in town, but he didn't seem fazed about being a fabric parcel drop off/pick up point! 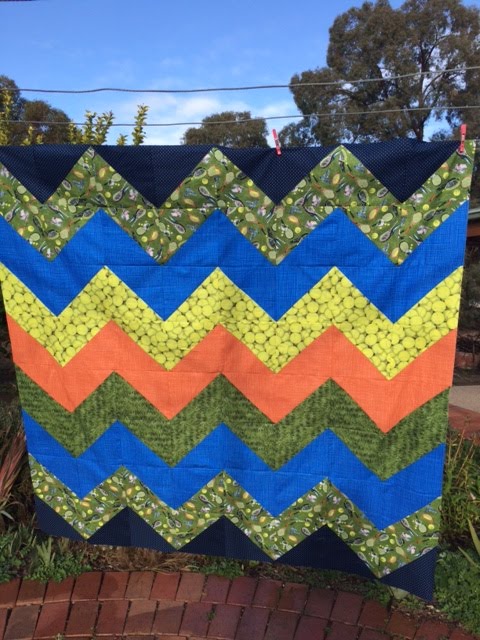 So this was the result, two rows of tennis rackets, one row of tennis balls and one of grass fabric (because he plays on lawn) combined with a dark blue, two light blue and a row of orange.  I got all the fabric from the Little Desert Patchwork shop except the orange.  I purchased a red fabric but it was the wrong shade when it arrived and in such large pieces it looked terrible.  Luckily Spotlight had the orange which as the same tone on tone print as the bright blue so it was meant to be! 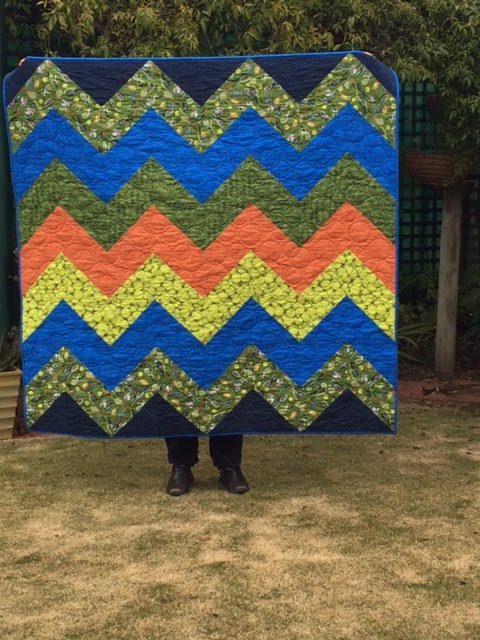 Then even more luckily my dear friend Vicki, kindly long arm quilted it within two days as she likes to do an all over pattern between custom quilt jobs.  I didn't put the binding on, just trimmed it and gifted it for this 12th birthday.  He was happy enough....just took me another month to get the binding sewn on, but its done now!
Happy quilting Sue.
at August 08, 2020 3 comments: