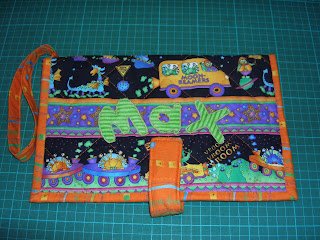 I made this nappy wallet as a commission, which I have never done before. The wallet is my own design and the version the lady saw was the original, which I then updated second time around. The new version had a nice (easy) machine written name label, but she wanted the original name version (with her sons name), fine but do you think I could replicate it again! Anyway I hope she likes it, as she hasnt picked it up yet. I did stress about the whole process, was the colour right, was my stitching perfect enough, will it come unpicked, blah blah blah! In the end I was pleased to be finished, so certain that I wont be making my living by selling patchwork! 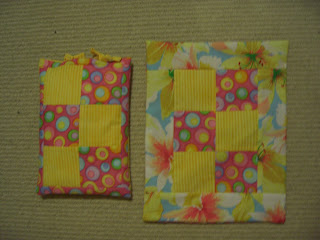 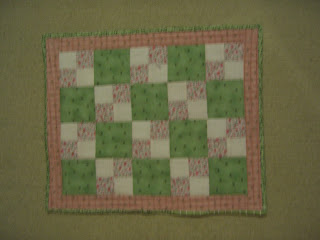 My favorite quilt, I love four patch and one patch combos. And the soft pink and green is nice, restful. 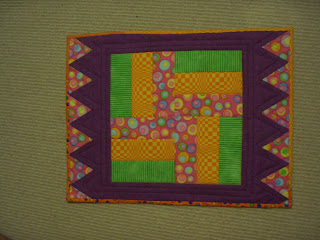 This blows my mind and gave me a headache when I had to quilt it. That orange is crazy on the eyes and I dont know what possessed me to buy it! Still it was the last bit in the scrap bin and I had run out of the yellow that matched the lime green. I told a lie to someone a few weeks ago, boasting about how I had stepped out of my comfort zone because I had put a orange binding on a quilt- claiming it was my first ever. Liar, liar pants on fire! I found THREE orange bindings in my left over binding box which ironically made the exact correct length for this quilt. I am not sure what to make of that other then I have a very poor memory! That and the fact that it is good to know that keeping left over binding finally came in handy! 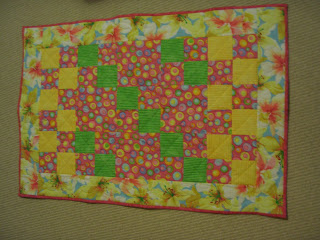 This was the quilt for the largest dolls bed, which I started making BEFORE I measured the beds! Hence the funny combo of colours and design. You know the funny thing is that I was just SO pleased to use the last of the awful floral print in the border, I really should have just given it away. Pleased I didnt though as it saved me, as now the quilt is the right size.
Been crazy busy here, sewing my little heart out, but a lack of photos put me off blogging. That and the fact that nothing was quite finished. I made the long weekend my deadline and finally finished the three dolls quilts for the dolls corner at Mr3yo creche, plus sheets, mattress, pillows and pillow cases. I dont think that the pictures show the true colour, the purple/orange/green and pinks are vivid and make my eyes water. However I made everything out of scraps/stash and as I only have boys I didnt have any nice fairy prints, so figured brights would be fine. The nicest thing was after I delivered them (and made up the beds) there were three little girls playing with each dolls bed within ten minutes, so that is the ultimate compliment!
In the last fortnight I have completed two (out of three) nights at a machine quilting course. This has really opened my eyes up to how to free hand quilt, as I was purely a straight line and stitch in the ditch quilter. In fact I called myself a quilter, but I was really a piecer as I prefered making the tops rather then quilting them. Not anymore, which is a good thing as I have several tops that need quilting. This is important to me, as when they are done, I will then feel that I can finally tackle some of the really outstanding UFO's on my list.
In the meantime I have distracted myself trying to make some easy gift's, as our local kinder (Mr3yo started early entry) is having a market and I offered to have a stall. My one past attempt at having a stall was a failure as I didnt sell one thing! So this time I am only going to make things that I like and can use as gifts for friends and family, so if they dont sell it doesnt matter. Still I am fast running out of time, so been stitching every opportunity I can. The up side of this is that I have found some great free patterns on the internet and made some things that previously I have been putting off, in preference for focusing on the UFO list. Well thats my excuse for yet again delaying tackling the UFO list!
Happy quilting, Sue.
at March 11, 2010 5 comments: