Luck of the Irish progress 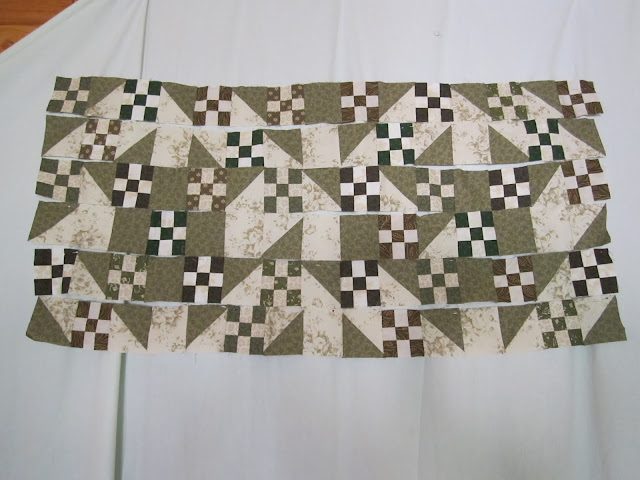 These were the rows that I had previously pieced, when I originally started working on my Luck of the Irish quilt.  But as you can see it doesn't look right?

But once I turned the page in the book and READ THE INSTRUCTIONS I realised where the mistakes were and unpicked them.  I started piecing the units into 9 x 9 blocks and little by little it grew into this; 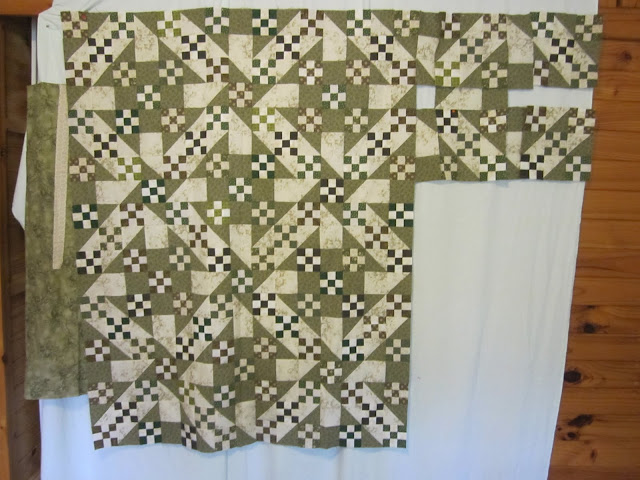 So you can see the pattern properly now.  I just have to work out the right size, because following the original pattern it was too narrow for a double bed, let alone a queen size bed.  I just have to be mindful that I only have a small amount of the background cream fabric left.  I think I will make enough blocks to make it wider by one (instead of two as pictured here) and see how that looks.
I had an idea for a cream border (different cream to the one in short supply) followed by a pieced border and then a plain border - possibly a green floral, not the one displayed, would like something with more colour in it,  what do you think?
DS2 first big bed was delivered during the week and set up by DH yesterday.  The excitement of his first night in a bed went by the way side as he fell asleep in my arms after tea.  I have been eager for the big bed to arrive, because my sewing cupboard was storing the new mattress protector and doona, all which was taking up valuable space!  AND then I realised the other advantage, once I had made up the bed. 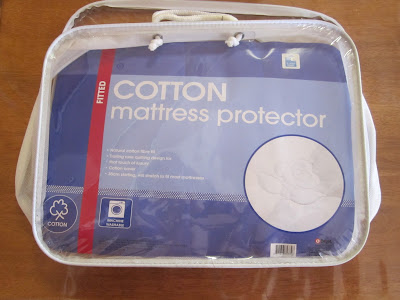 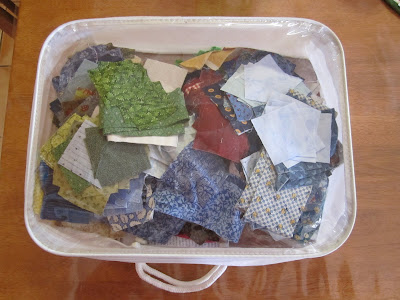 A lovely new home for all the 2.5" strips and squares I had cut from my stash! There is plenty of room left, so the job of cutting up more unloved and partially used fat quarters is now on my To Do List.  I have had a project in mind for some time, but this quilt by Meredith English, published in the latest Homespun has caught my fancy.  I might need a mantra .... stay focused, avoid distractions, avoid new projects!
Happy quilting, Sue.
at May 15, 2011 3 comments:

Did I ever tell you that I am easily distracted when it comes to Patchwork?  Hmm, well I am one of "those" patchworkers that has multiple projects on the go...but normally half are in the cupboard and not being worked on.  But because I have reduced my UFO list by so many, now the remaining projects are easier to find!
Since Easter I have managed to work a little bit on quite a few projects;
i) my knitting (needs a final detail constructed before all can be revealed)
ii)  the Eastwood wedding quilt (quilting still in progress)
iii) Celtic quilt (still appliqueing)
iv)  Animal I Spy with blue sashing - now to be named Katrina's quilt (hand stitching binding down) AND
v) Luck of the Irish quilt (piecing unit into blocks) - makes me sound like housing developer!!
So I am just going to give you a sneak peak of the Luck of the Irish, because you haven't seen it before... 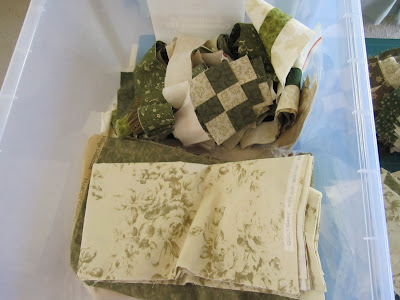 This is the box I rediscovered in my cupboard.  Under this pile of nine patches were lots and lots of already pieced blocks; nine patches and half square triangles plus the single patches already cut. 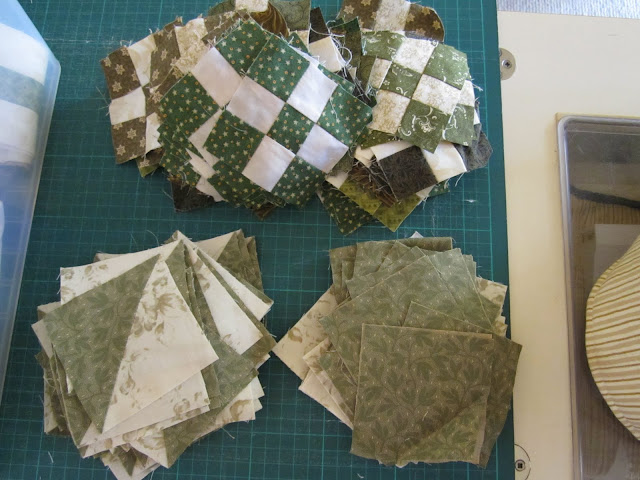 And under all that was the first six rows that I had started piecing together.  They got shoved in the box when I realised I had made a mistake in one row and was going crossed eyed trying to work it all out from the little photo in the book.  THEN I turned the page over and duh your not suppose to piece them in rows, but rather into bigger 9 patch blocks, which are much easier to chain piece and layout...without going cross eyed.  So out they all came and hence a new distraction and another WIP (Work In Progress) pile in my sewing room!

I do however have a finish to show you.  Its a bit of a cheats finish, because it was long arm quilted AND someone else sewed the binding on - but its still finished!
﻿ ﻿ Ages ago I found it in the cupboard, realised it only need a minor amount of piecing to finish and a border. So I took it to my charity quilting group, we sewed a border on, had it quilted (our group is run by a long arm quilter) and then someone else in the group put a binding on it. I found it last Thursday and borrowed it back so you could see that I have finished it.


We had a great day at charity quilts on Thursday because we got the nicest letter and photo from a family who received two of our quilts for their children.  These were two of the twenty quilts we sent to small town outside of Adelaide that was heavily flooded in the summer. It is nice to know that your work is appreciated and it was a very cute photo to the two little boys to boot.  We then gave out a further six quilts to a mother of five who was widowed last year and all her family live overseas.

Quilts heal those that are fortunate to be quilters and have the power to heal those that receive them.  We are lucky to live in such a beautiful country where nature is our only occasional (usually) enemy.