Blogger wont let me load any photos ... I am getting the following message...


Whoops! You're out of space. You are currently using 100% of your 1 GB quota for photos.
Photos are stored in your Picasa Web Albums account and are included in your 1 GB free quota for photos. Additional storage you purchase is shared between several Google products and is in addition to your free quota.
The offer to buy more space is the bit that concerns me...is this for real or a scam?  And if its for real and I dont want to buy more space, is there another option?
Any assistance from more techno savy friends would be greatly appreciated, Sue SA.
PS hoping DS1 is only a few years off telling me how to do stuff on the computer!
at November 24, 2012 2 comments:

I know you all said that a 2013 deadline for my Christmas table runner would be fine, however I didn't want to add to the WIP or UFO list...not to mention the wish list as I am already coming up with new patterns to try for 2013. 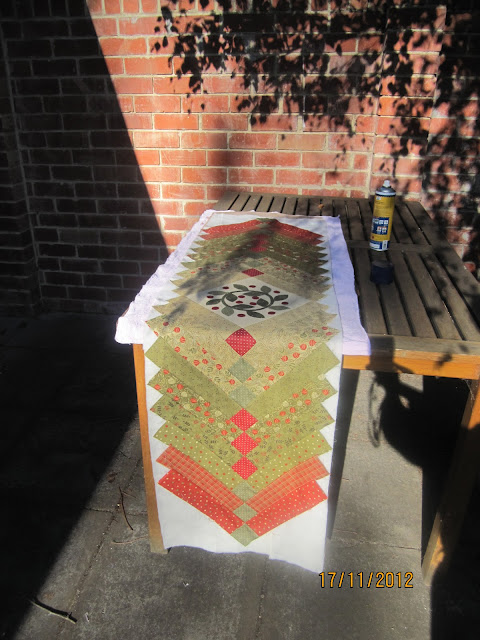 So I took the excuse of being parked in by the curtain installation man, to not go out Friday afternoon and sat and stitched until I finished the piecing.  Then early Saturday morning I spray basted it...luckily I had a nice large piece of red check for a backing and I did my usual trick of piecing left over long strips of wadding.   However I wanted to wait for it to dry before I started quilting. 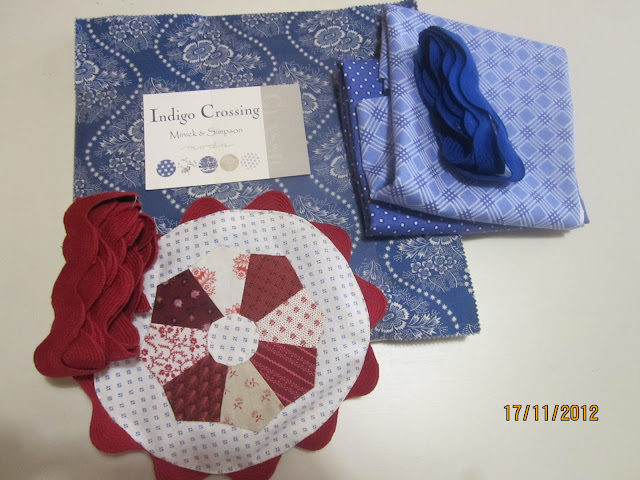 I had only made the four centre Dresden's and they are suppose to be surrounded by embroidery.  I started one Friday night while watching TV.  It involves lots of satin stitch, which I struggle with.  So I went to the patchwork shop for the jumbo rick rack...but forgot to bring the blue background fabric.  Hence I couldnt decide and ended up with blue and red rick rack and two pieces of blue fabric, for another project.  I went home determined to skip the hand stitch and give my machine a run. 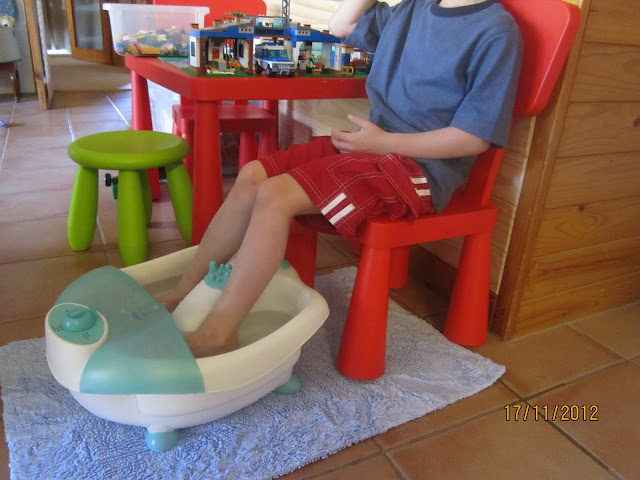 DS1 decided he wanted a foot spa, which DH brought me when I was pregnant with DS1!  It doesn't get used as often as I would like...on me!  So after DS1 had a turn, DS2 had to have a turn.  By this stage I could have mopped the floor with the water that was on it!  Then later DS1 had to have another turn, but lined up his Lego first, so he could watch TV, play Lego and have a foot spa!  And because he can read now he wanted to know if he could have the "heat and bubbles" option on... he wasn't convinced that kids/water/electricity was a bad mix, but I was 100% sure I wasn't plugging it in! 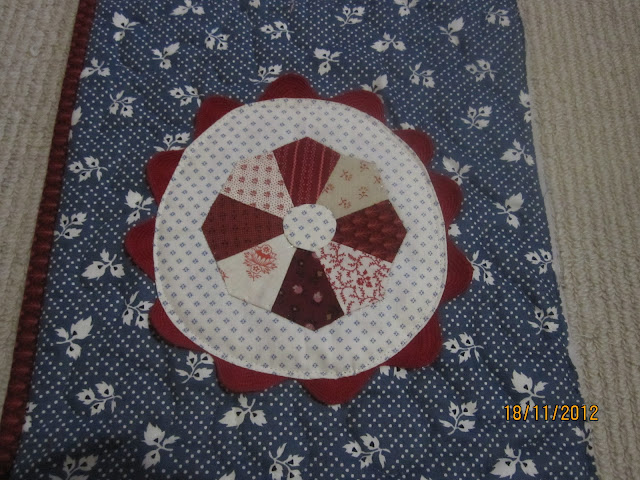 So in between running a day spay I got the Dresden's finished - I am skipping the embroidery, figure they look fine without - especially as I used a print for the background.  I also figured this is 2012 and I could justify machine applique (it is a bag after all), so dug out the mono filament thread and voila! 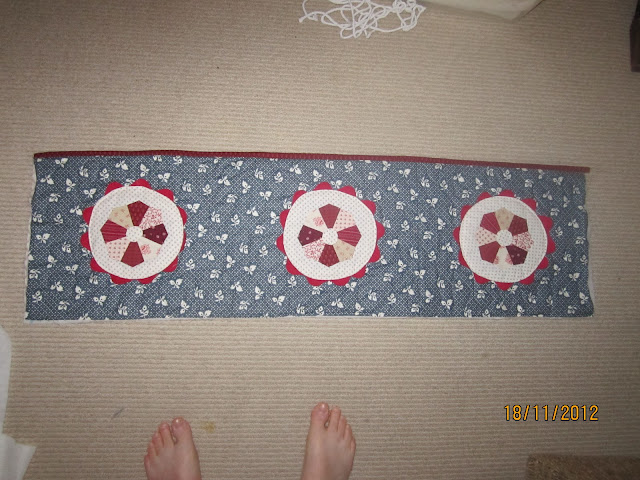 So this is "the pocket" completed.  Excuse my feet, they didn't get a spa yesterday!  Now the pattern is fairly good, but it didn't mention the need to quilt the three layers...just add the binding.  I was convinced that wasn't going to work for me, especially since I used wadding scraps (again got to use up those long pieces left over from quilt edges) instead of iron on pellon.  And given that iron pellon only sticks to one side I did a quick large stipple all around the Dresden's.

Oh and I had to go back to the patchwork shop because I ran out of red jumbo rick rack!  BUT the bonus was I came home with the my FIRST layer cake ! ;-)  Well I could NOT leave it there because the fabrics are a lovely mix of blue/cream/gold....just perfect to make the Blue n white lil twister that is on my wish list BUT make it a large twister using my new large twister template.

2013 is going to be my year of dragging out patterns/tool that I have brought and not ever made/used!

Hope you are having stitching good time this weekend, happy quilting, Sue SA.
at November 18, 2012 4 comments:

About a year and half ago I saw this pattern at The Patchwork Cow for a Christmas table runner.  I had the bright idea that I could duplicate that at home with red and green fabrics.  Don't worry about the fact I had never made a braid before.  Or that the cute understated Christmas fabrics were what made it special.  Or that I hadn't taken note of the lovely applique design.

So this year when we went back on our shop hop to the Patchwork Cow I stopped being stingy and brought a kit....my first kit!  So the other day I thought I cannot, must not, really shouldn't let another December go by without making it up.  Its a table runner, how long can it take?! 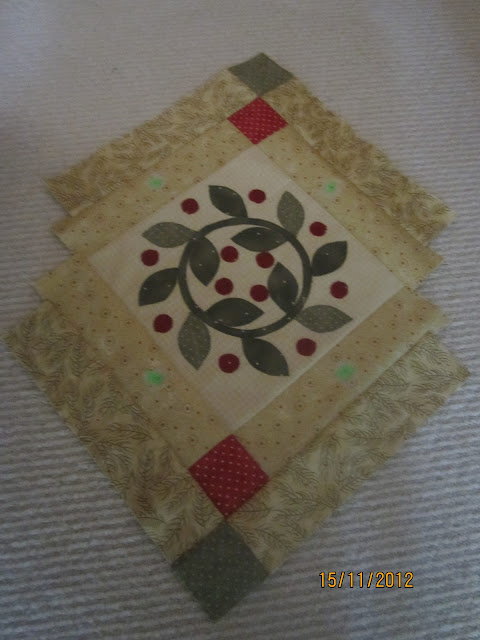 Well between feeding kids, watering vegies, finally remembering to fertilize the lemon tree and complete the washing I did get a start.  I used tear away behind the applique block (just like Heather told me to) and it made such a difference to the button hole stitching!  :-)
The bright green stickers are numbers so I sew the right strip on the right side...its a bit confusing having this end that doesn't meet up with anything...when you are stitching its easy to forget which way is up!
There is a chance I will have this done before Christmas, just perhaps not before 1 December...only because I got distracted and started one of my new patterns purchased at the show...nothing like making more UFO's when I should be making Christmas pressies!
Happy quilting Sue SA.
at November 16, 2012 3 comments:

Thursday I had a quick shopping trip after my white glove duties.  Friday I was aiming for a BIG shop....ideally I wanted one of these, but there were no dealers at the show.

There was a stand selling these, but I couldn't make up my cotton picking mind.... 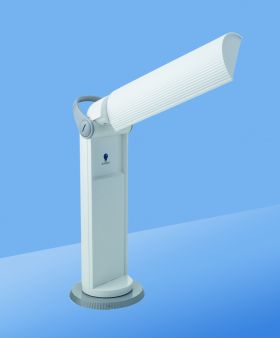 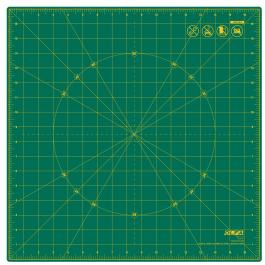 But was even more confused about my priorities (cutting mat v cutting machine). 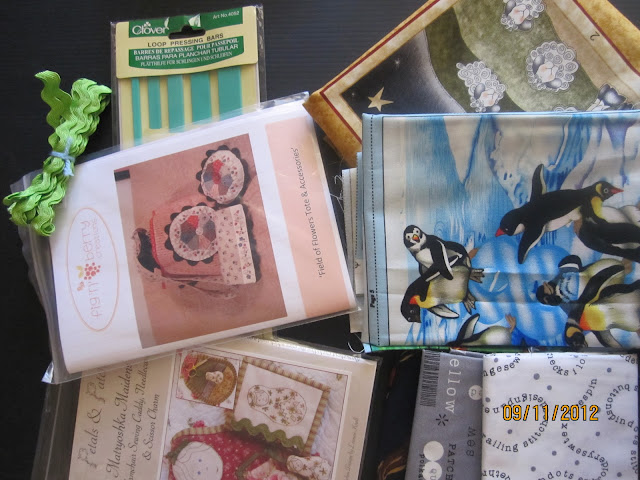 SEW I didn't buy any of them, instead I came home with this. Not bad, just not what I had planned. Although I do need that exact shade of green rick rack for my basket quilt. 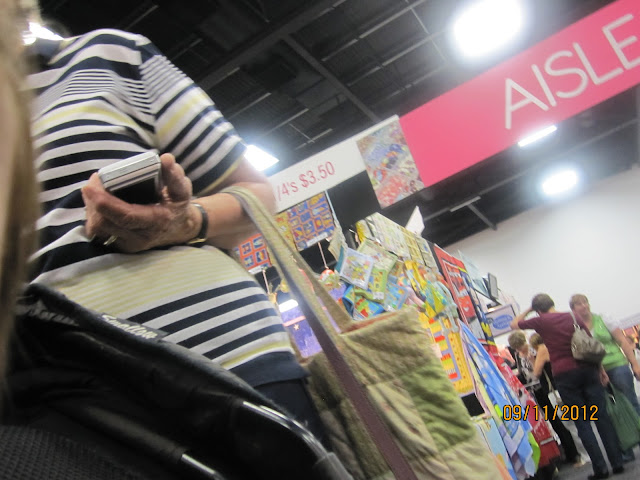 These lack of decisions were not helped by the presence of my helper, although I was impressed by his patience.    You can see here he was trying to get my attention about the bargain fat quarters.

And then he entertained himself with taking self portraits, unflattering shots of shoppers tummies n rear views (!) PLUS lots of quilt photos, some of which are actually very good.  Unfortunately the rules dictate no loading photos online without the quilt makers permission...sorry I don't have the personal phone numbers of the entire guild to ring them for their OK!  However some of the eye candy (e.g. the winners) can be found HERE at the SA Quilters Guild website. 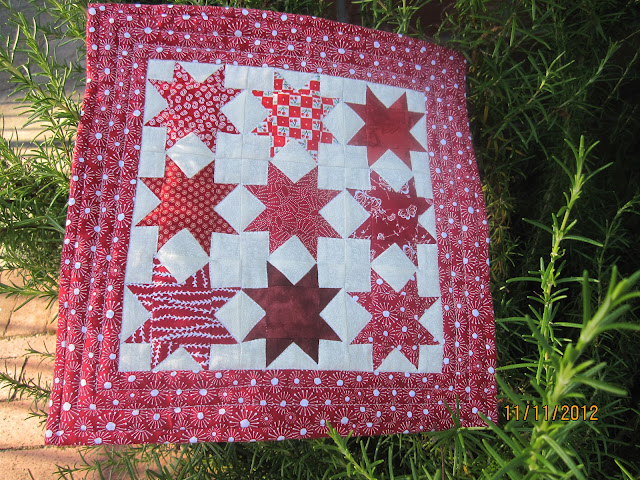 This quilt maker is a natural show off though and would like to reward you with one quilt photo.  This mini wall hanging was started months ago and abandoned due to the points being cut off and the wonkiness.  However I decided I needed to finish it yesterday, as Christmas countdown is galloping along and this is after all red n white...despite the wonk.  I think it will be table mat though, so I am less likely to see its wonkiness everyday.....I really need a miniatures class to learn non wonk! 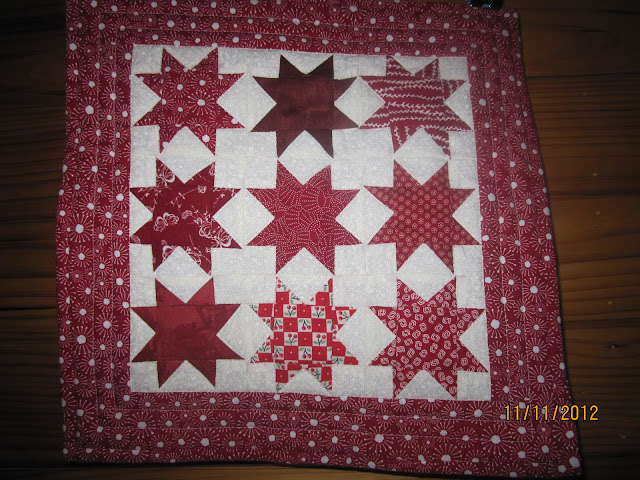 Finally anyone has any feedback to give me about spending my life savings (OK bit of an overstatement) on a Accu Go cutter I would love to hear from you.  Now that the need for impulse spending has passed me buy, perhaps I might do a little research first!

OK got to go and start that Christmas table runner kit I brought in July!
Happy quilting Sue SA.

Today's dilemma, will I wear the new purple button necklace... 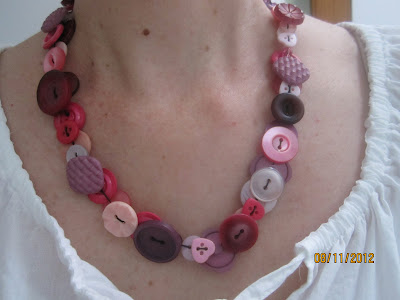 Or the orange one? 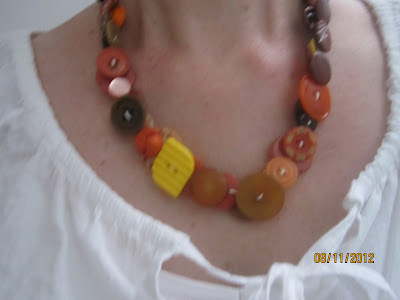 Who cares, the Quilt Show is on and I am there!  Here's today's loot! 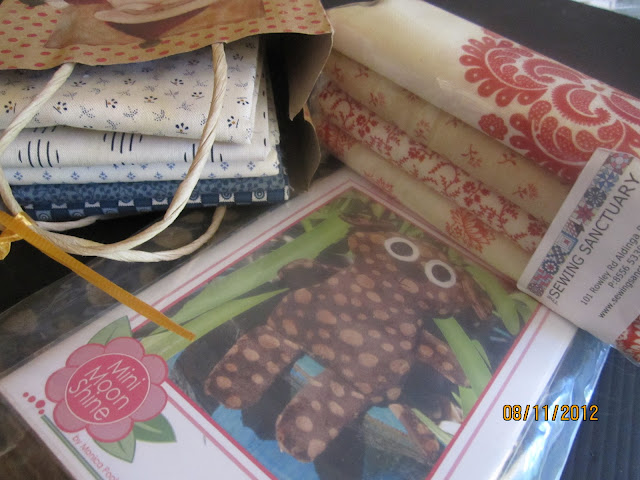 I just played white glove lady today and then had a 30 minute window to make purchases before I had to put my responsible mothers hat on and go pick up the kids.  However the next three days are open to longer shopping expeditions opportunities, so I will be returning with my list for new needles, a new cutting mat and hopefully a fancy light so I can see to sew at night!  If your in Adelaide pop on down the showgrounds and check out the great display of quilts.
Happy quilting Sue SA.
at November 08, 2012 4 comments: 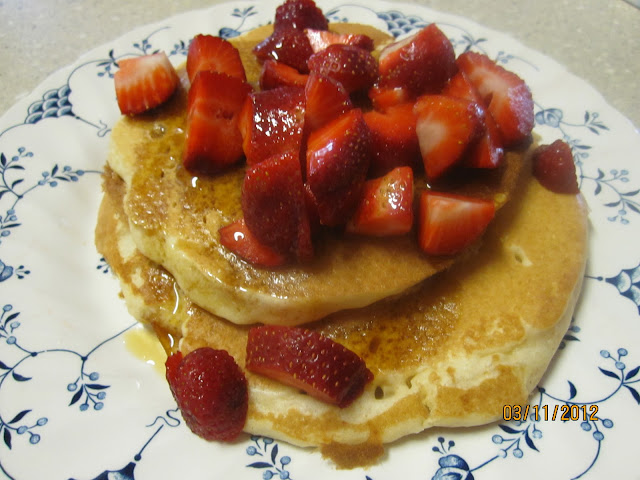 Sift flour and baking powder into a bowl.  Add the sugar and mix.  Whisk the egg and milk together with the cooled butter.  Add to the dry ingredients and whisk until smooth.

Heat a small non stick frying pan (grease first if its not non stick) and pour 1/3 cup of mixture into the hot pan. Cook on a medium high heat until bubbles appear on the top.  Flip over and cook the other side for less then a minute.

Serve with chopped banana, strawberries or fruit of choice and maple syrup (the real deal not that imitation rubbish!) OR with cream or ice cream for those of you who don't suffer my dairy intolerance!

Makes about 10 large fluffy pancakes....more if you like small dainty pancakes and less if you use wholemeal flour as the mix is thicker.

I freeze the left over pancakes  (only two pancake eaters in this household...amazing I know!) with a piece of non greased kitchen paper between them, and then reheat in the microwave.  Obviously they are not as nice as fresh, but DS1 enjoys them with strawberry jam and if I use wholemeal flour I justify it by the thought that he is getting some goodness!

This is a Donna Hay recipe that I adapted for my lactose sensitive purposes!
at November 04, 2012 3 comments:

Yikes where did October go?  It is scary how fast Christmas comes this time of year, yet I do love Christmas and already started to think about which decorations are going up and if I can justify buying new ones!  However there is some gift making to happen first and I have a made a little start. 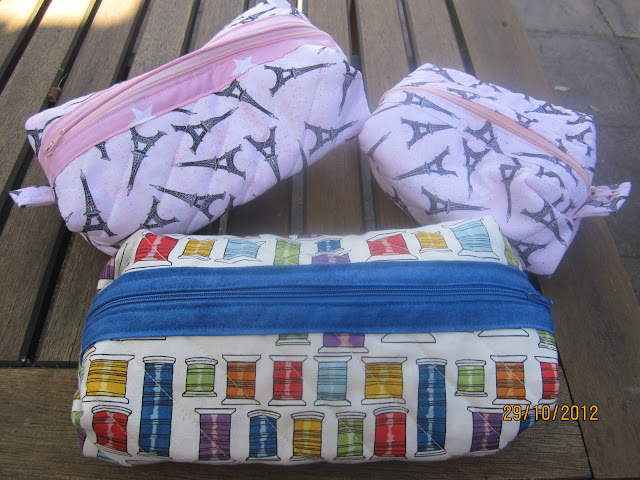 These cute bags are a variation on the humbug bag design and taught to me by Heather Ford, quilt teacher extraordinaire! 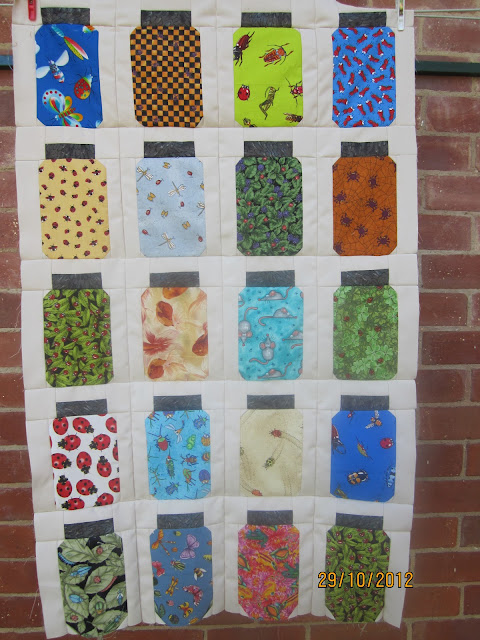 I finally put together the other Bug in a Bottle quilt top that I started for my charity quilt group.  I didn't have any time to put a border on this week, but its on the to do list for next week. And finally I have had a medical conditioned diagnosed after all these years, alas there is no cure for Quilt Pox!  Lucky my DH has learned to live with it and me!
Happy quilting, Sue SA.
at November 03, 2012 1 comment: