Despite the distractions of school holidays, work trips and feeding orphan lambs (while the real farmers in my family were away on holidays).... 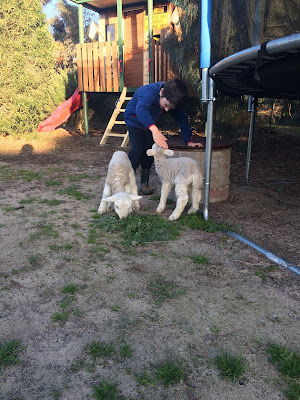 I have made some quilting progress on a couple of small projects.
This is my start on quilting the spring table runner from Quilts and More magazine. 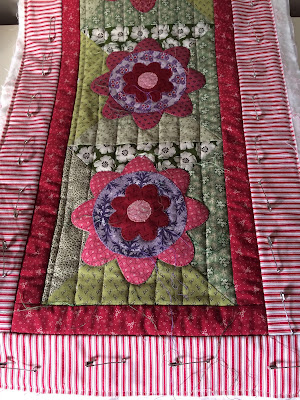 I followed the pattern for straight lined quilting in the centre, but my borders are plain instead of appliqued. 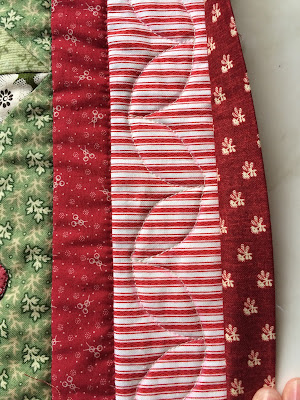 So I was forced to decide on a pattern on my own.  This was the only quilting stencil that I own that fitted the width of the border.  The bonus with this stencil is with such gentle curves,  I can use my walking foot.  I ma very happy with the results.
I am yet to decide how to quilt the border on my Jo Morton mini. 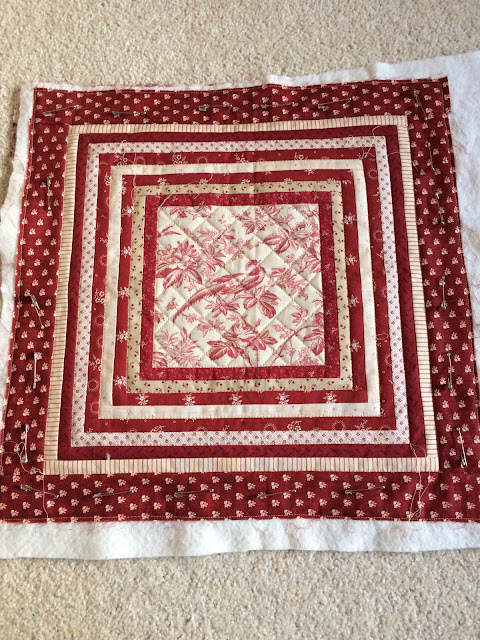 Giving serious consideration to some micro quilting on this mini, but happy with central panel being cross hatched and stitch in the ditch for multiple borders for now.  I have to sit and think about this project for a while.  In the meantime I am quilting yet another table runner...I only seem to be able to focus on little projects at present :)
Happy quilting Sue.

I had a extra day off and the basket of Rainbow Scrap challenge blocks was about to overflow.  I have been using them as leaders and enders, especially the same coloured nine patches.
So I laid them out and used my new Sew Easy pins to number the rows of blocks. 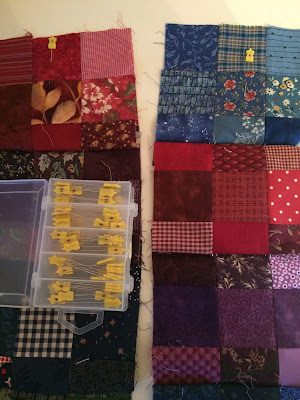 Then webbed the rows using the Bonnie Hunter method.  If your not familiar with webbing, its the ultimate in chain piecing when your putting a top together.  See Quiltville tutorial here.
I do it slightly differently as I pin my rows first, and then just deal with two rows and when I am feeling comfortable I tackle three rows at a time. 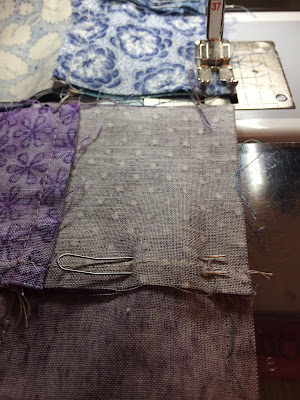 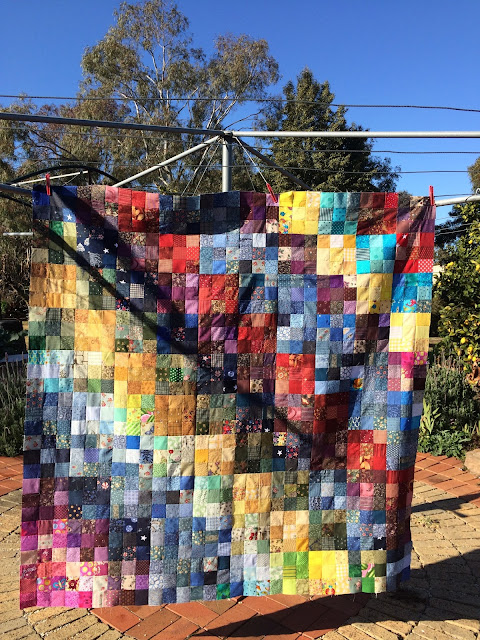 I don't have a title for this quilt yet.  But I am really pleased to report that it did use all the nine patches...until I discovered I had put a blue block where I needed a green block....so I now have one left over blue block!!
Having said that, these were the ultimately easy leaders and enders blocks and used up oodles of 2.5" squares of scraps, so perhaps I could see my way to making more in the future :)
Happy quilting Sue.
at July 21, 2017 15 comments:

This month, so far I have made, one blue mini Dresden from my reproduction fabrics, 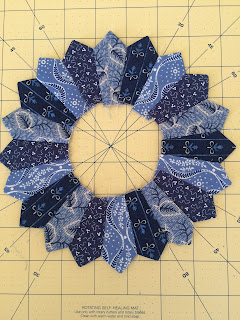 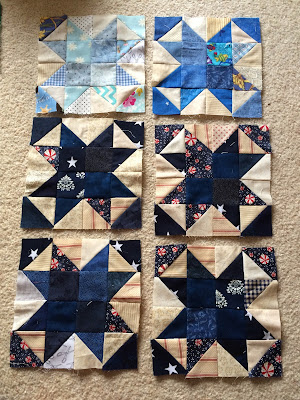 eight four patches made from scraps, 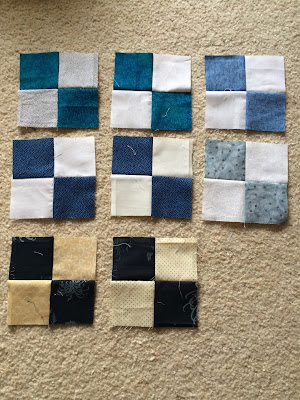 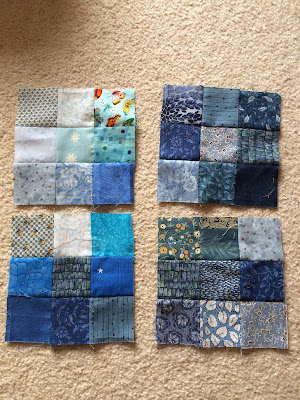 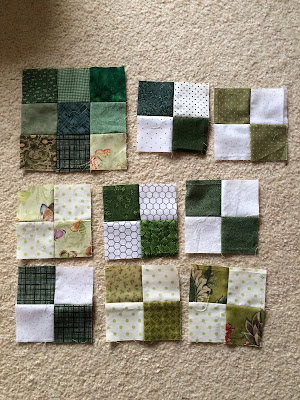 Truth is that I was running out of blue, so I deconstructed some four patches I had made previously for a long forgotten project, so I had more 2.5" squares to play with in blue.  And of course now I have all the left over colours to use up as well!
There are plenty of half square triangles cut in blue, but I have run out of neutral triangles. So off to play with the Go cutter and whittle down some neutral stash.
Happy quilting Sue.

I had been given some jungle prints from good friend Elaine quite some time ago.   Elaine and I had met through sewing charity quilts, so I thought it would be appropriate to make a charity kids quilt out of these fabrics.  I decided on a simple nine patch so you get a glimpse of the animals in the jungle and in a days sewing go this far.  I wanted to do a thin outer border of the white polka dots and then attempt a pieced border with the rest of the animal fabric. 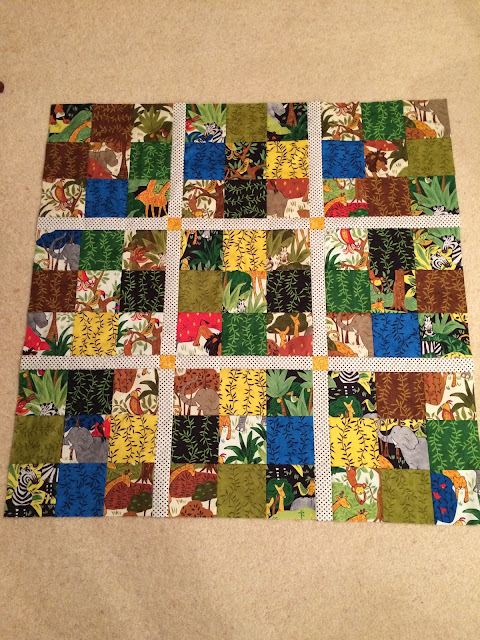 I had a date with some local ladies to make kids charity quilts, where I ..... 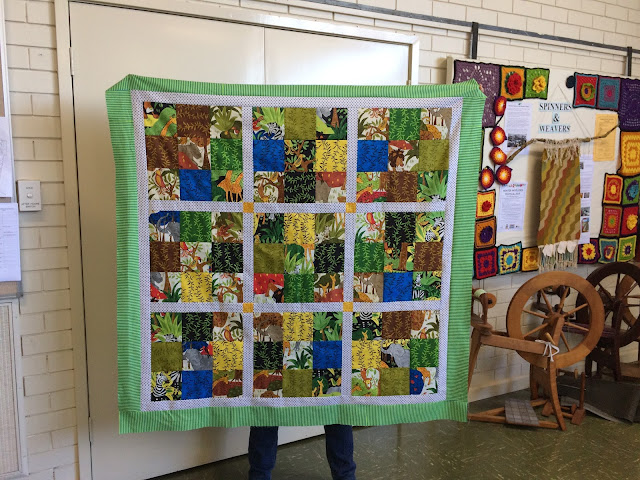 (with their advice).... decided on a simple bright stripe from my stash. 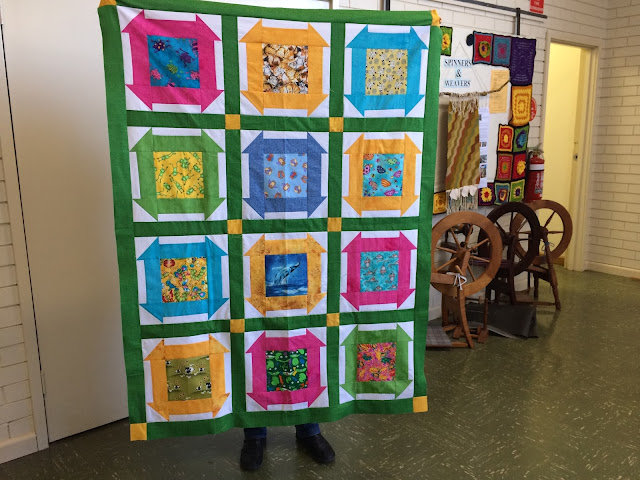 Then finally stitched the big churn dash blocks together with some sashing from my stash. 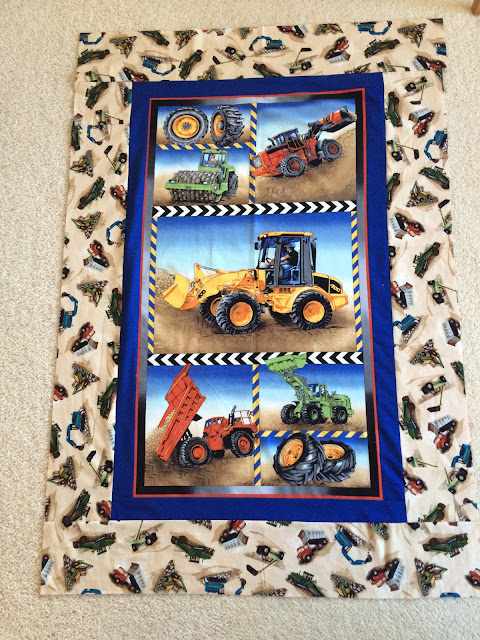 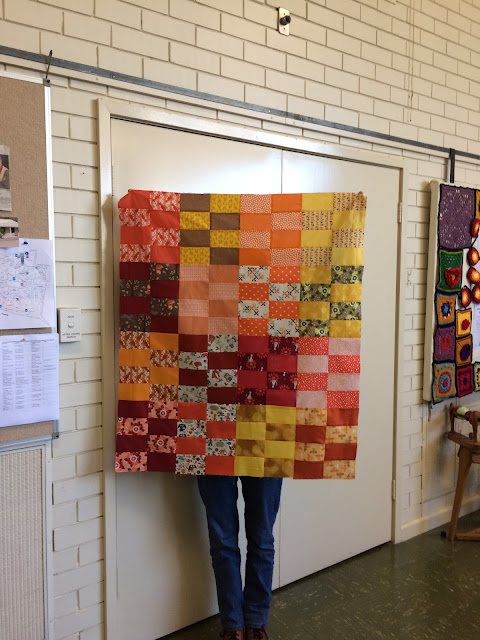 Lisa made this gorgeous quilt top. She is not finished yet, needs borders. 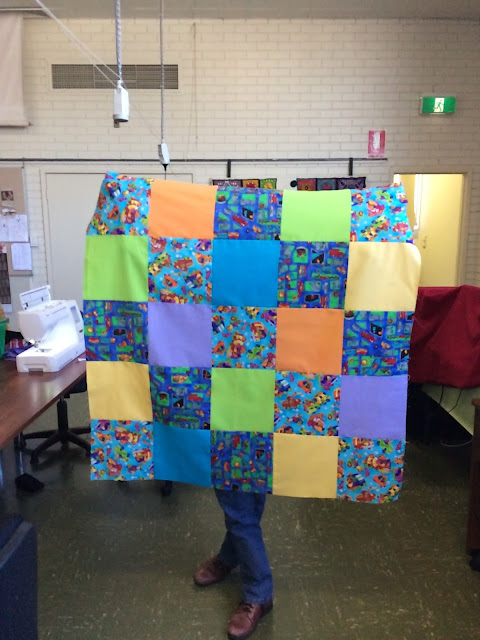 And Chris finished this cute top.
So a productive day was had by all and some stash sharing occurred, which is always fun.
Happy quilting Sue.
at July 14, 2017 6 comments:

I am participating in the Temecula Quilt Co Marvelous Mini Monday. 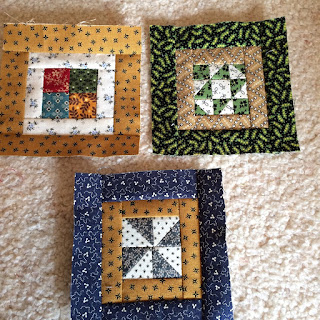 I wanted to use reproduction scraps, but couldn't let go enough to have a different fabric on each side of the centre block, so I have been very controlled. 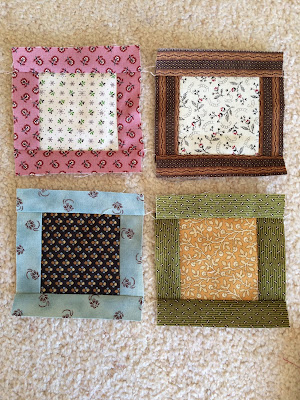 I liked the blocks so much I decided to make a second set in red, pink and shirtings. 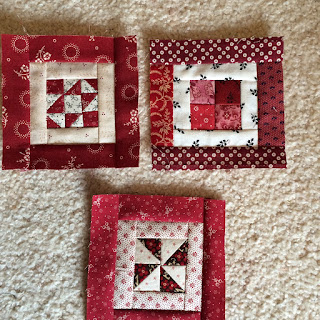 After making such tiny centres, to have solid centres for block 4 seemed a bit "easy"! 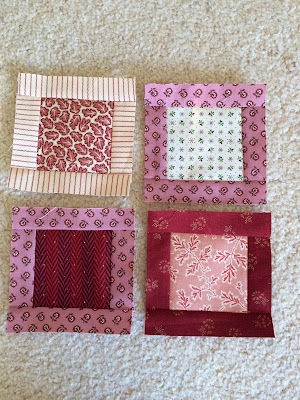 No complaints, because we had to make four of them...so easy is good!
Happy quilting Sue.