One more childs quilts and a little shopping trip

What do you do on a Saturday morning when DH flies in with jet lag, desperate for some sleep and you have two excited noisy boys in the house?  I let the kids play computer games in my sewing room, but I was blocked from my latest project (which I had left in the lounge room) while hubby was napping.   These are my purchases from Hetties Patch - which I have started to prep, for a new project. 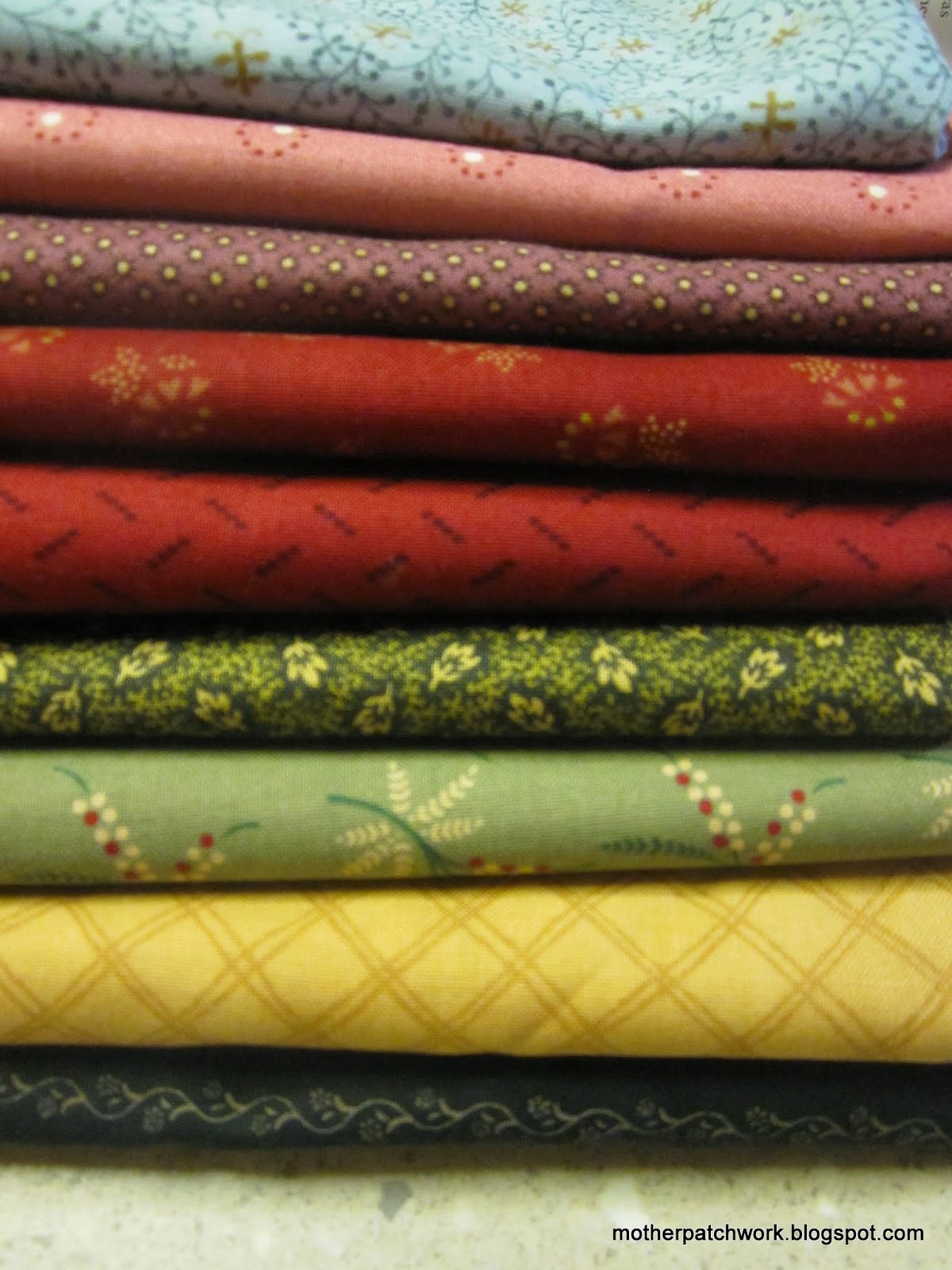 That black print down the bottom is a Primitive Gathering, from the same range as the black and tan log cabin wall hanging I just made!  And the soft green print I discovered I already had at home in the form of a fat quarter!
This is my new project, Bittersweet Briar from Simple Graces (book) by Kim Diehl.  Its a large wall hanging and there are two versions in the book, this is the wool on cotton version, but the all cotton version has a cream background.  I would normally always go for the light background, but this colourway really speaks to me, so black it was - but I am using all cotton.  I am discovering that I don't have as many reproductions as I thought.  Hmm think I can justify some more shopping!  And to justify starting a new project, this is going to be my autumn wall hanging, as per my wish list! 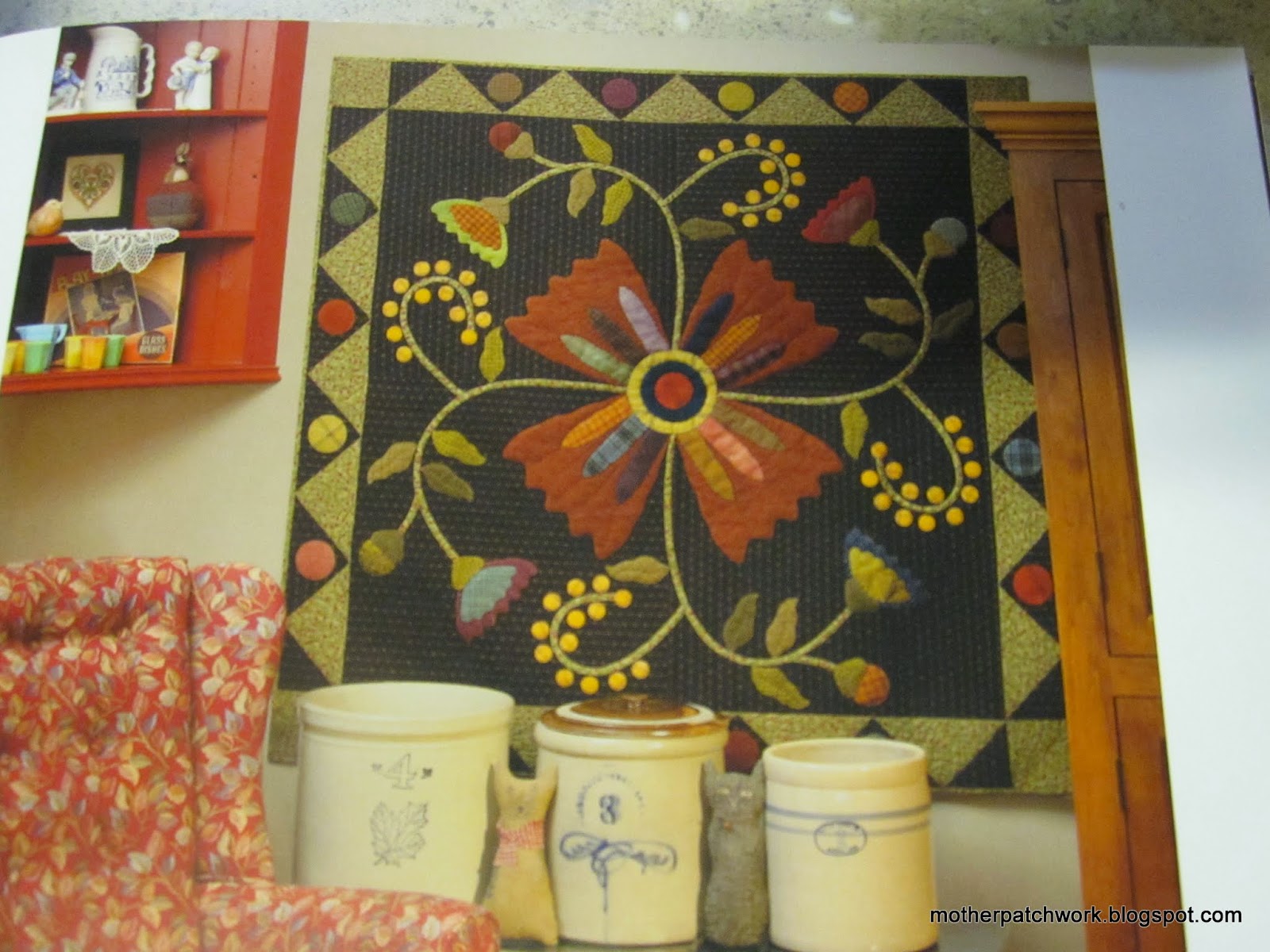 Unable to access all the goodies to start work I started eyeing off all the things IN my sewing room!
I quickly found the box of novelty fabrics that I had cut up.  I chose 4.5" squares, because there seemed to be a good pile of them and I was only aiming for another cot quilt.  I sorted the squares into colours and sewed them into pairs, then fours.  I did have to cut a few more blocks out of the stash to get a bit more variety, but fell in love with the effect. 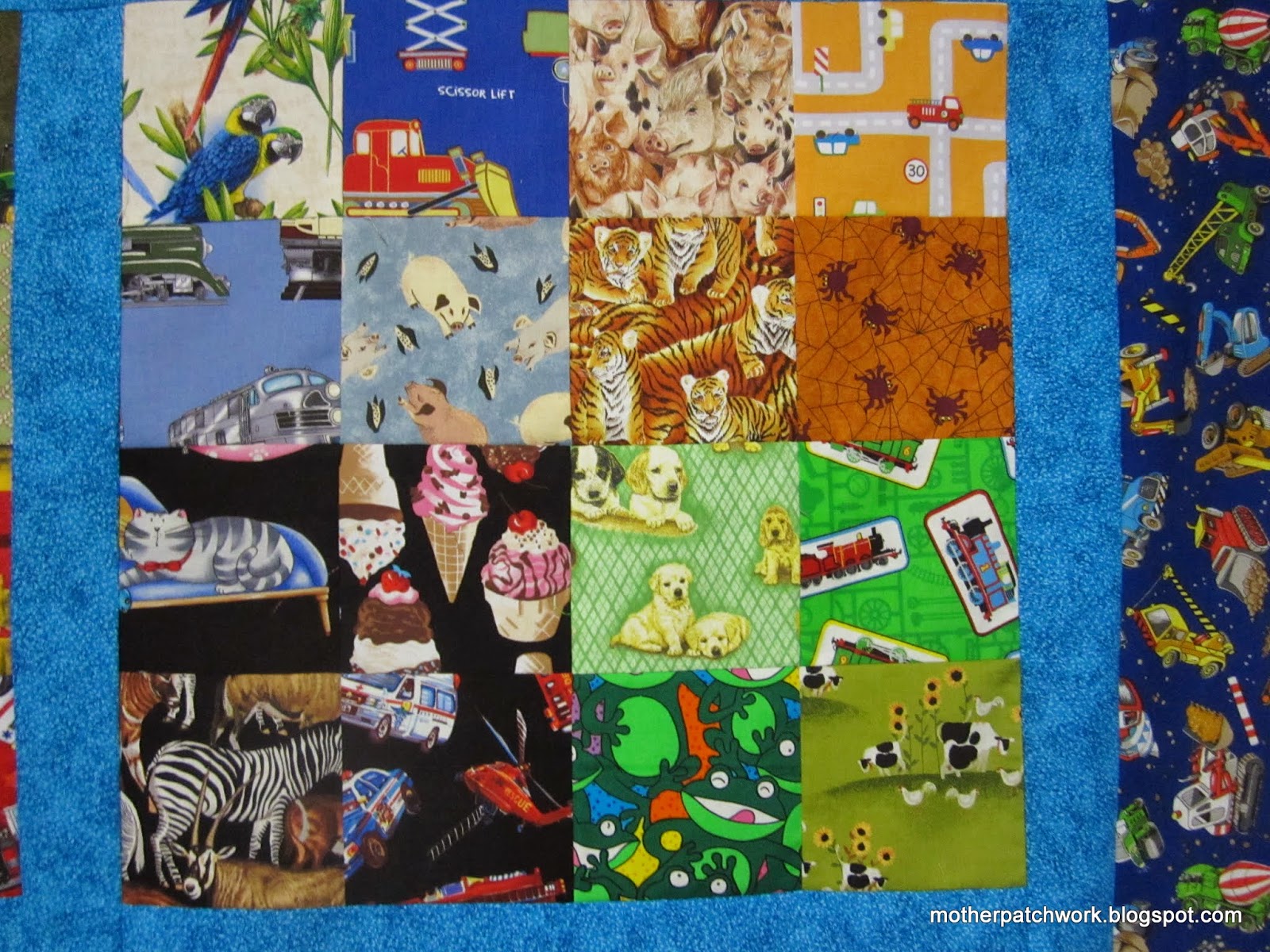 My previous I Spy quilts have been a riot of colour and this version gives your eye somewhere to rest.  I added a plain sashing that worked with the ultra busy border fabric.  All this fabric came from my stash.  I was aiming for a gender neutral quilt, but I gave up, I have far more boy fabrics in my stash then girlie ones! 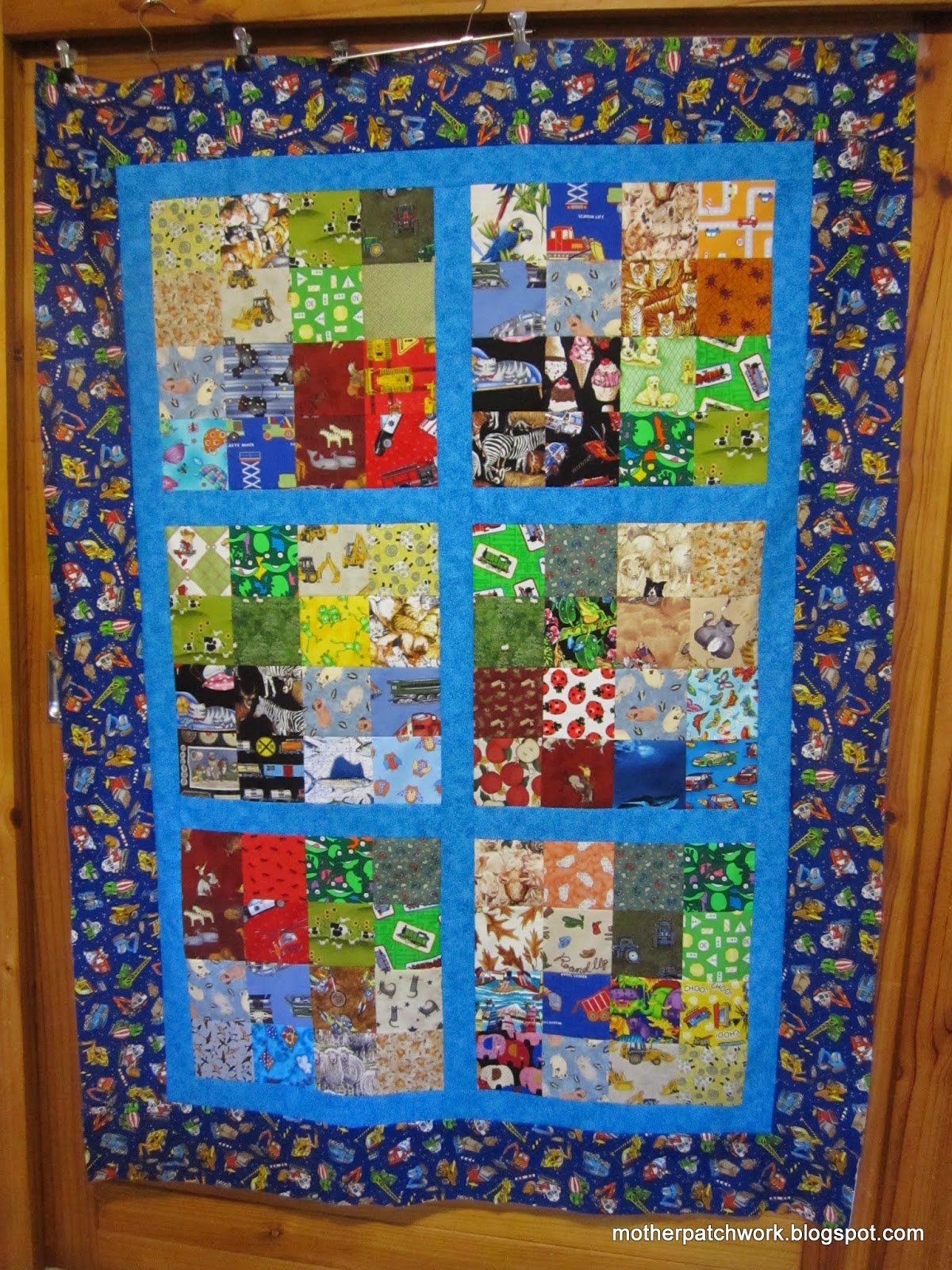 It feels good to have made a large lap/small SB size quilt all from the cupboard and all in one day!  Mind you DH didn't sleep all day, but he didn't mind that I sewed for most of it!
Happy quilting, Sue SA.
at May 25, 2014 4 comments:

I have been steadily working on the basket quilt, which is suppose to be a summer weight quilt for our bed.  In reality it is a UFO that is starting to haunt me.  However I have made some progress,  I have mastered the art of "perfect circles", enabling me to make the extra cherries for the 3rd appliqued block.  The pear and apple applique blocks are missing here - off getting their borders added. 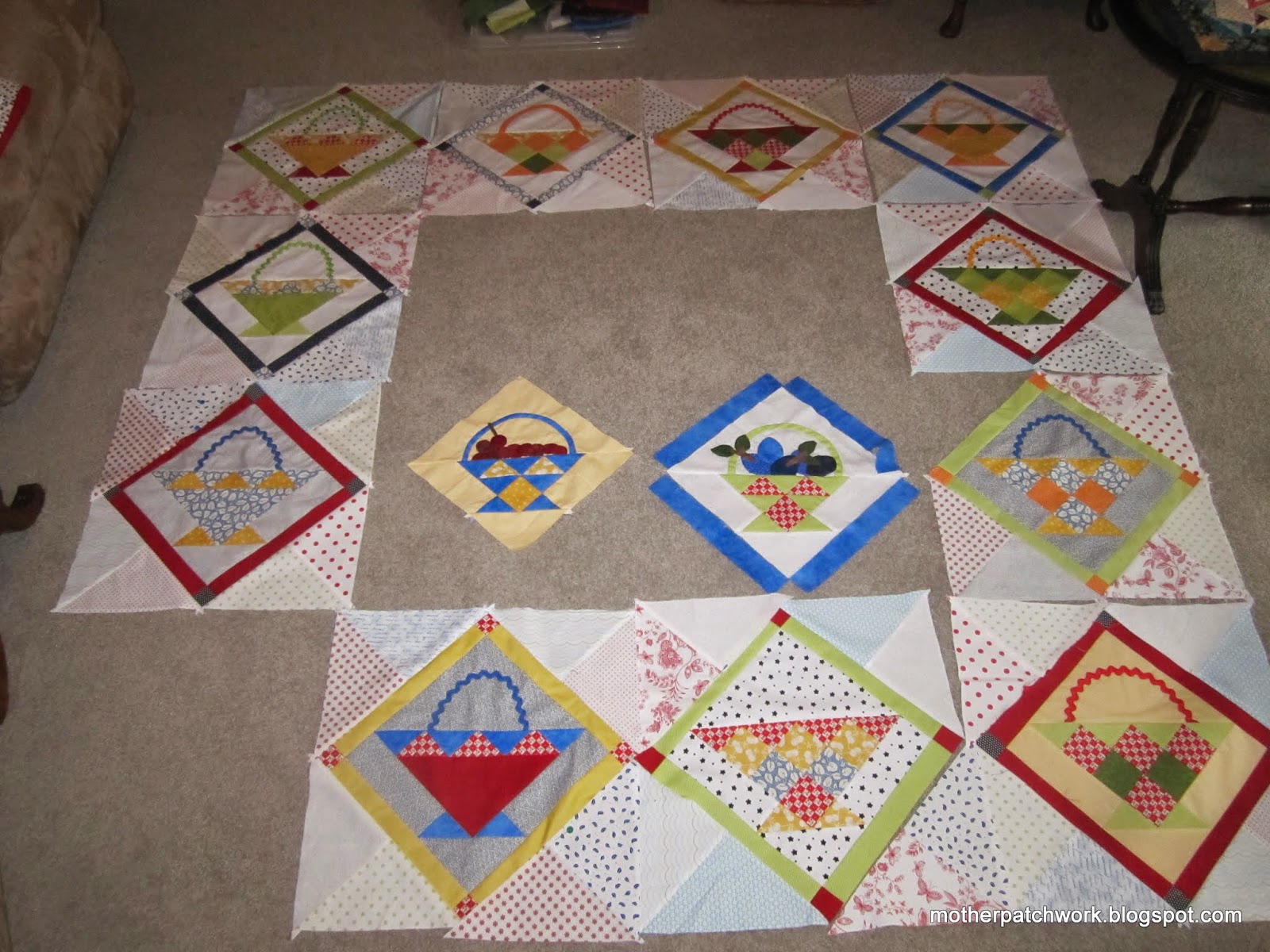 I have added the neutral background triangles to the completed basket blocks.  It seems I am short one basket block and missing a handle on another...sigh! I am determined to finish this quilt, but keep getting distracted. 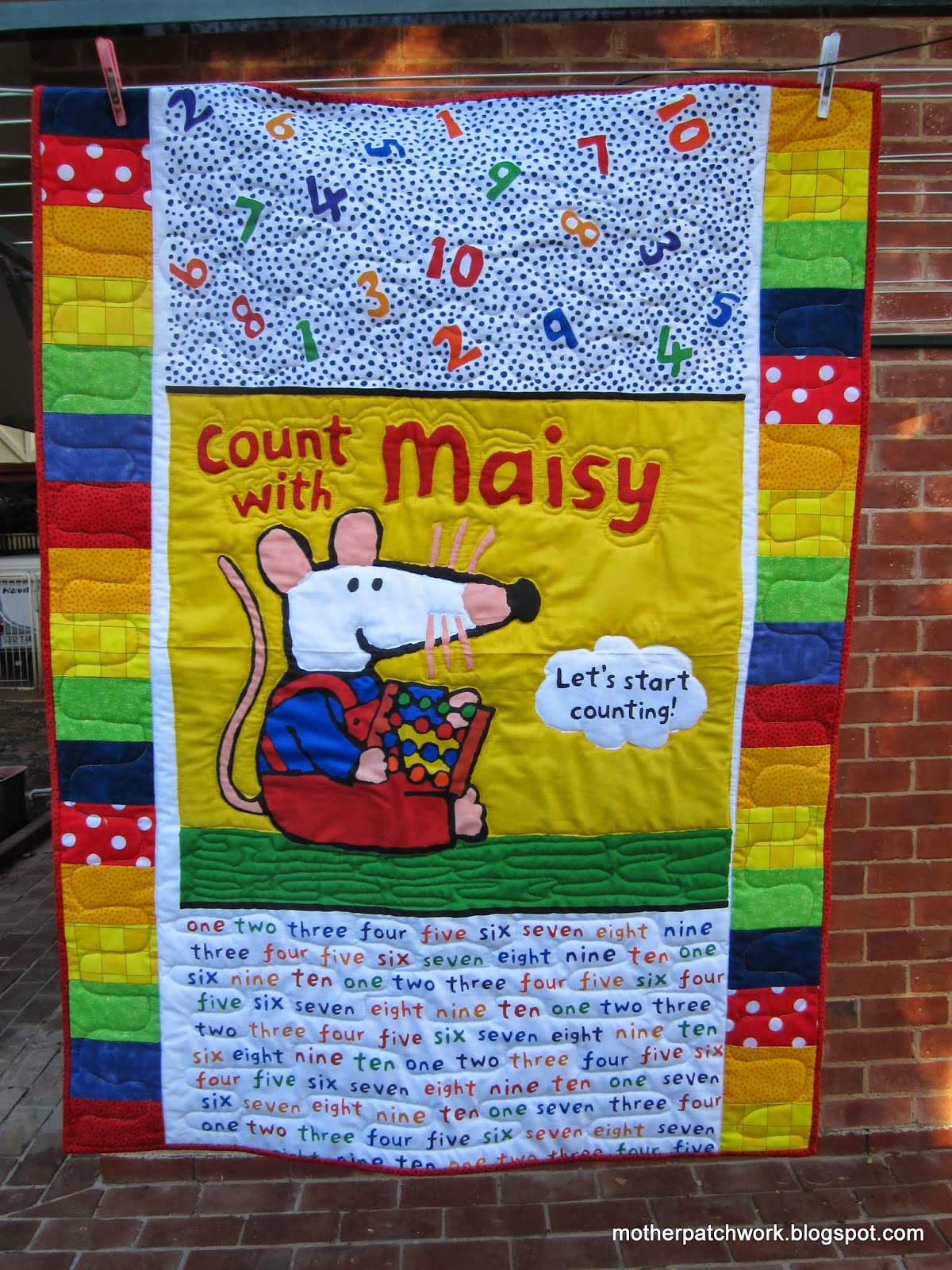 A quick cot quilt, just added some colourful prints to the sides.  This is the second Maisy panel I have used this year and there is a third waiting in the wings.  I had some fun FMQ this one, but tried to keep it simple. 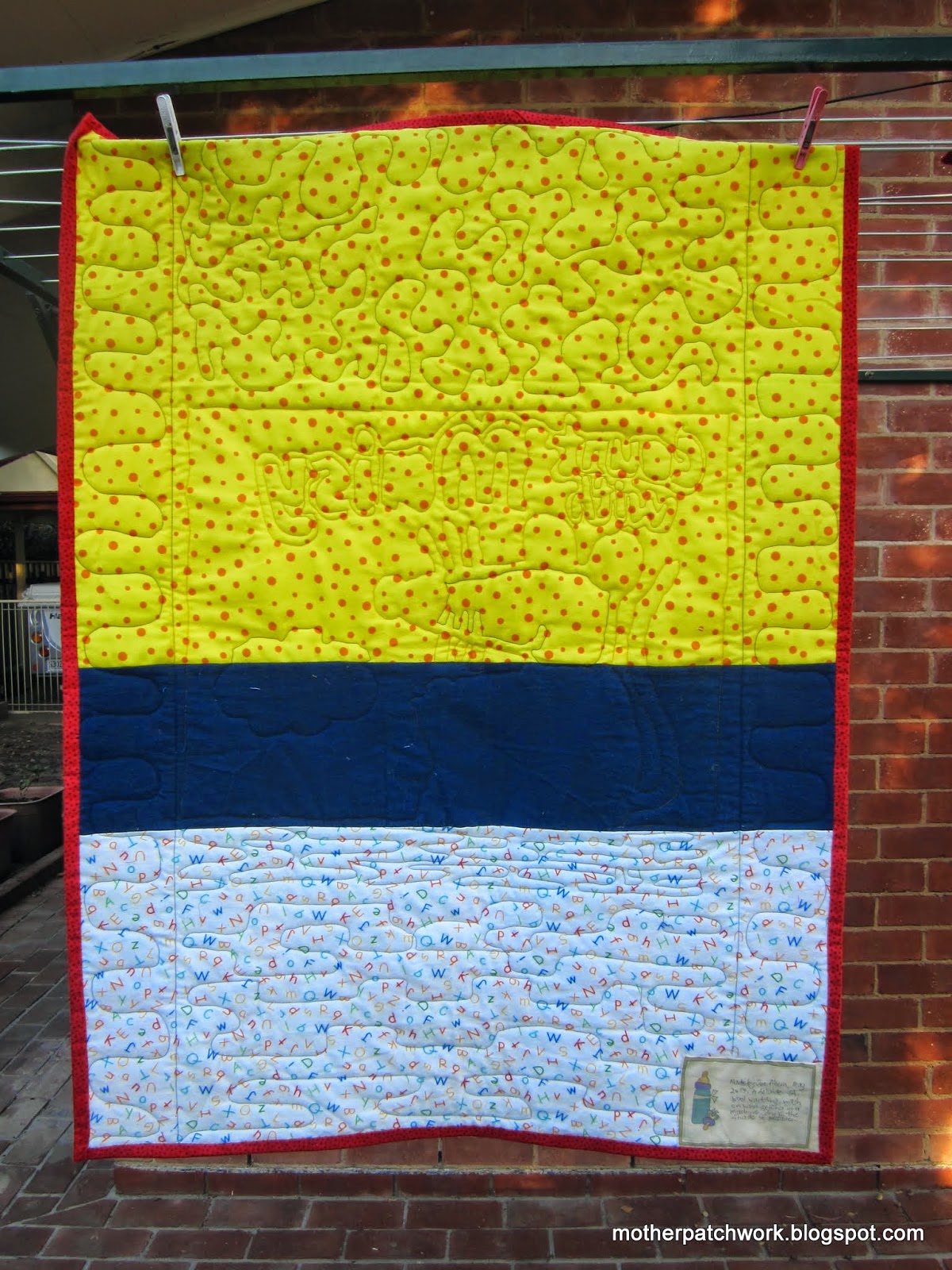 The back is made up of leftover flannel I found in my stash.  I love flannel backings for babies.
I have had this pirate fabric in my stash since our oldest son was a toddler, he is nearly 8. 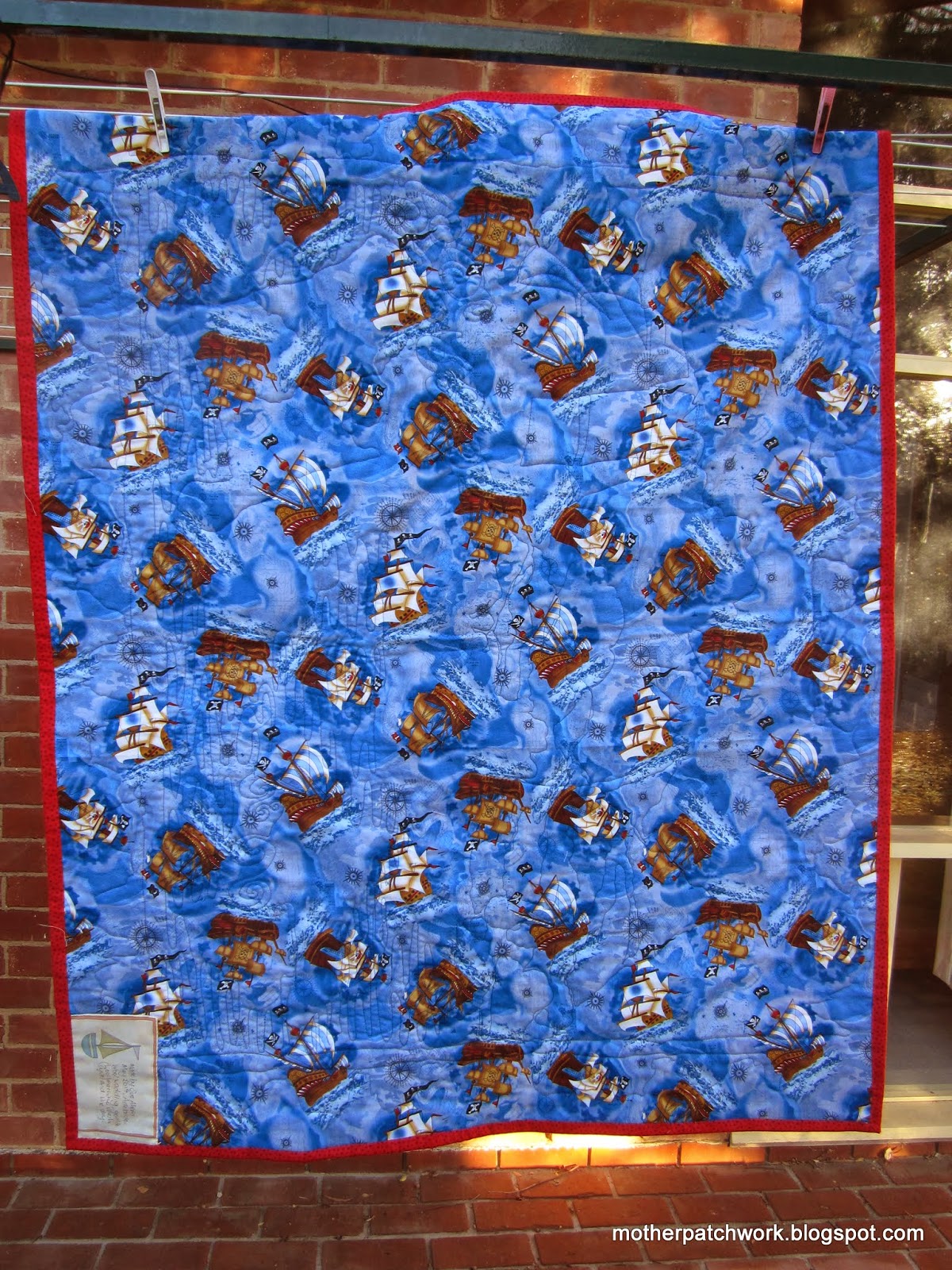 So I couldn't go past using it as a backing for this panel.  I didn't even need to add a border to this panel, just quilted and bound it.  Another quick cot quilt finished, perfect baby gifts.  More FMQ fun was had. 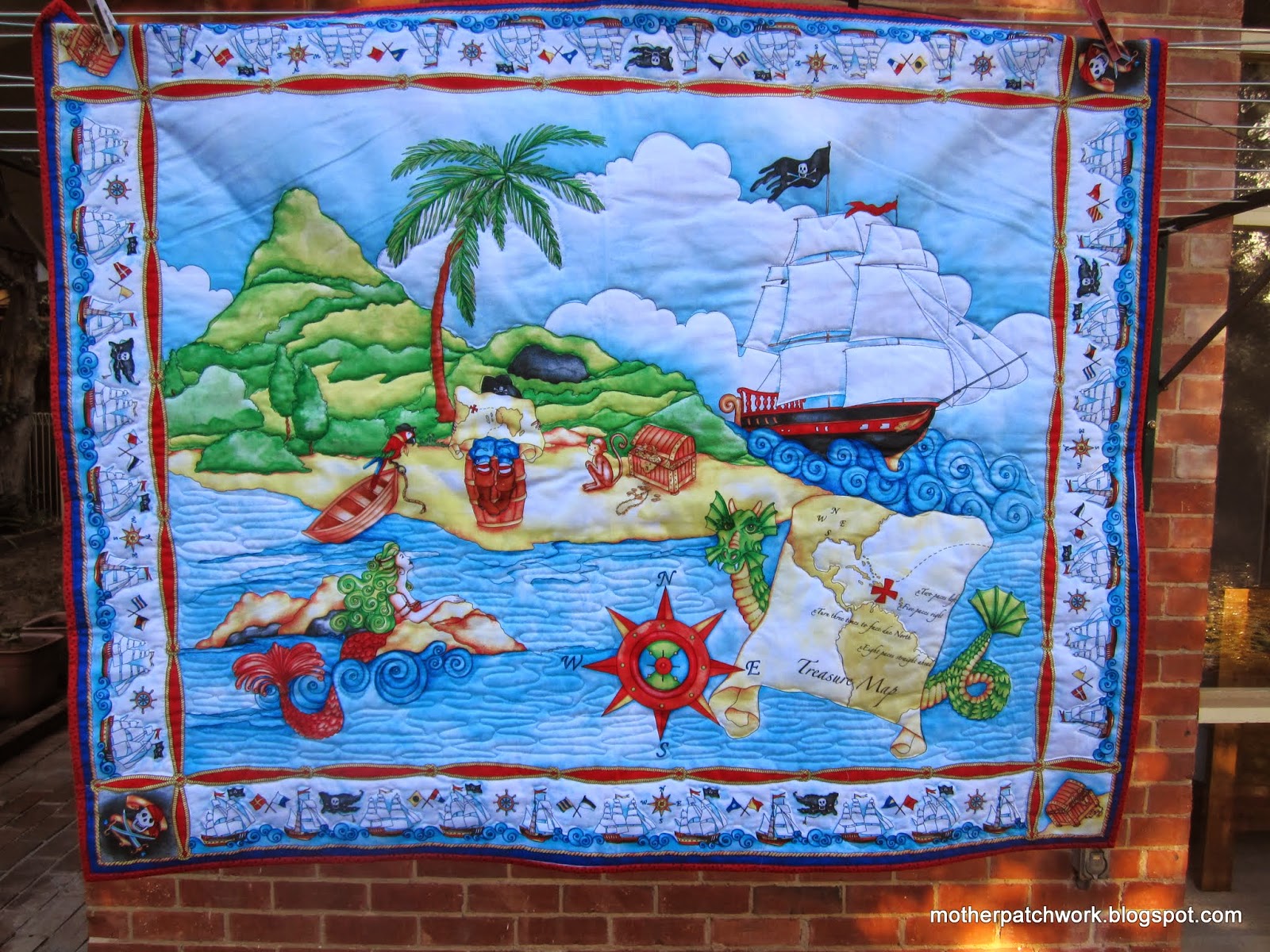 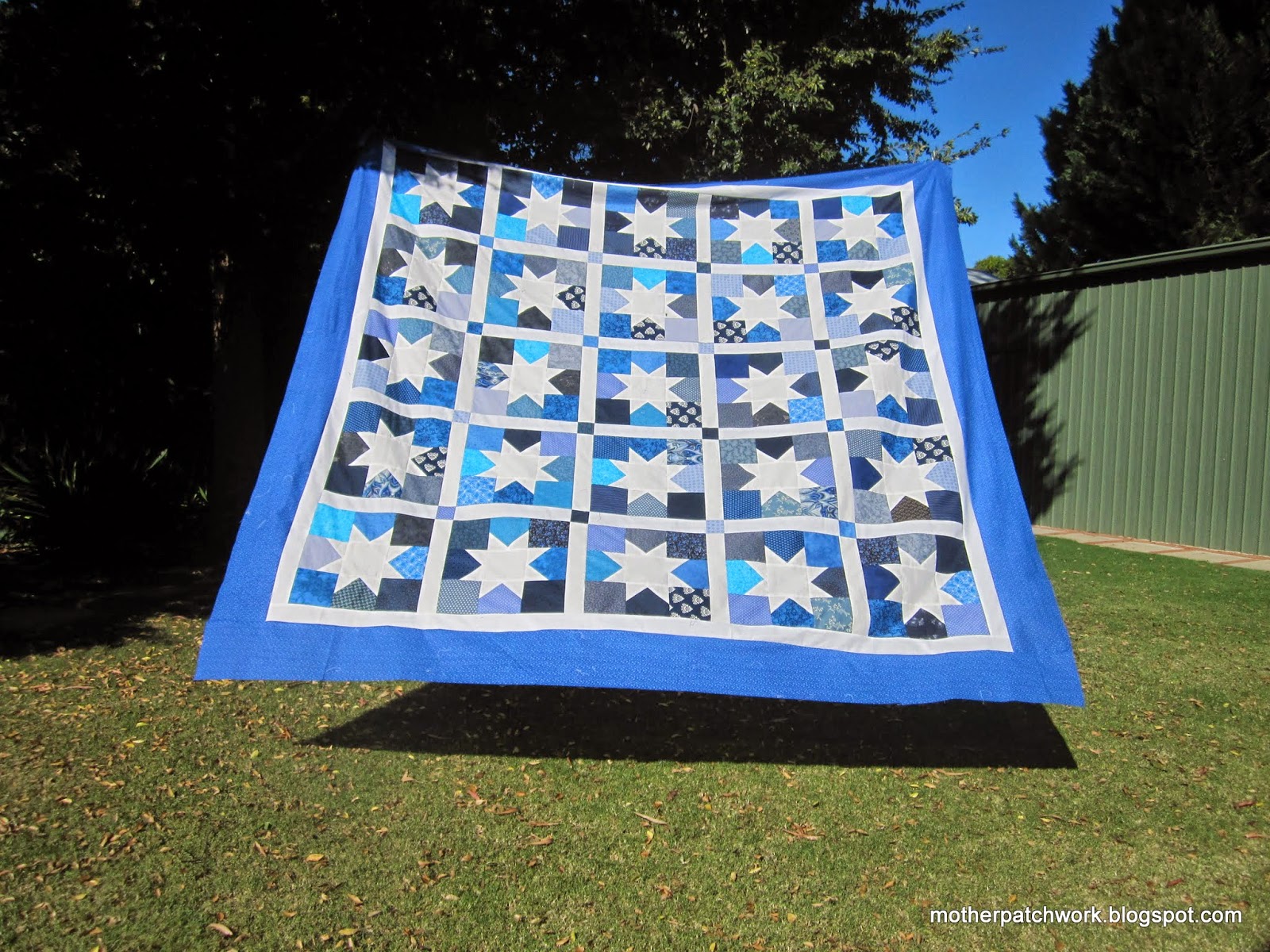 Well my trusty long arm quilting friend Elaine Kennedy turned it into this... 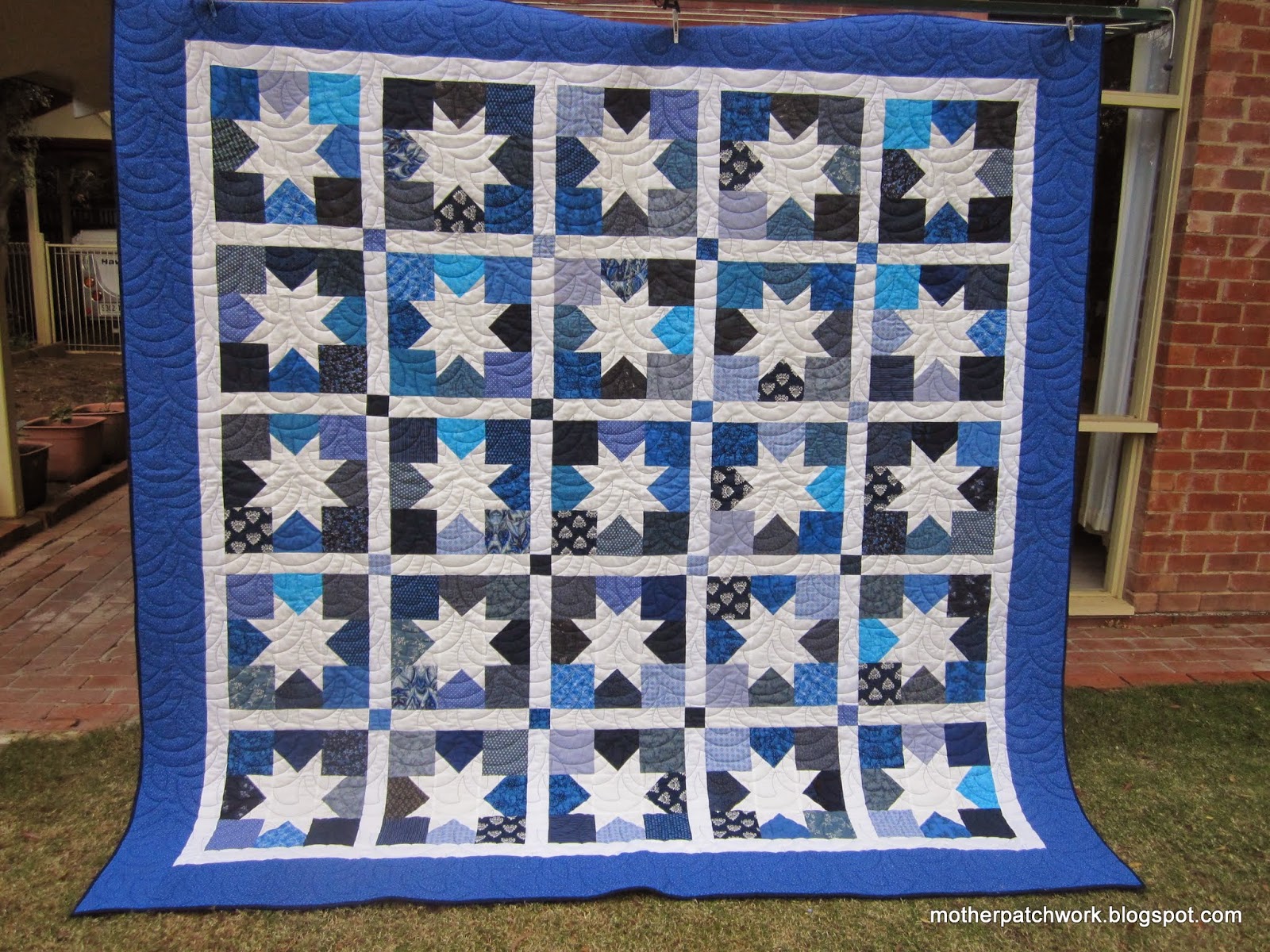 I think I am in love! 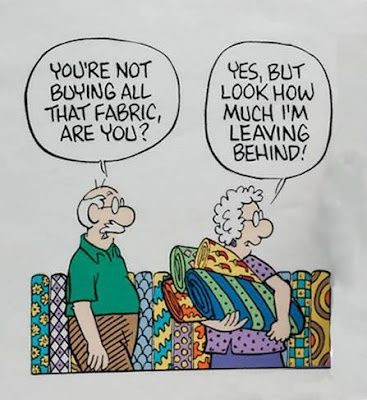 I did wear a hole in my finger stitching down the binding, this QS quilt is big by my standards!  I finished the binding watching season four of Downton Abbey on DVD.   I cannot say I have been super busy this week, but I have been buying fabric and wadding.  That retail therapy enabled me to finish the cot quilt I started last weekend, add a border to a panel to make a second cot quilt and back another panel, all of which I then spray basted, so I guess that means I will be quilting all weekend!
Happy quilting, Sue SA.
at May 16, 2014 8 comments:

I finished the mini log cabin wall hanging!  Technically the pattern was in the winter edition of Quiltmania and had a little holly leaf on it, but I thought it would just make a great all year around wall hanging to add to my collection...now I just have to convince hubby to put up some hooks for me! 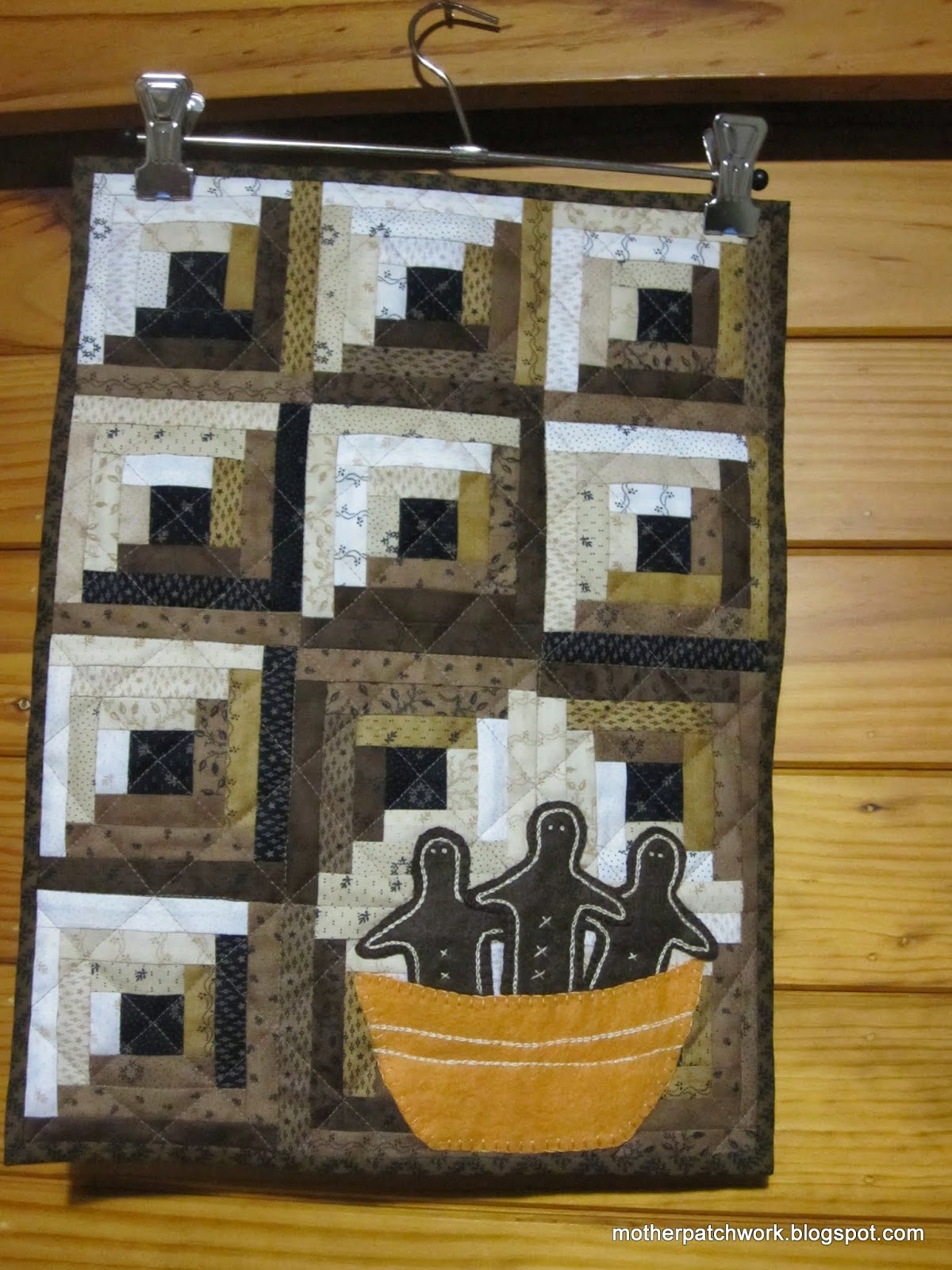 My little school house wall hanging has stalled, as I decided I hated the sashing and cornerstones that I added.  I think the problem is that there is no contrast, because I have used positive and negative blocks together.  I cannot bring myself to use black, but I am beginning to think that a grey or very dark background might be called for.  I am avoiding the unpicking, hence it is being ignored in a corner somewhere. 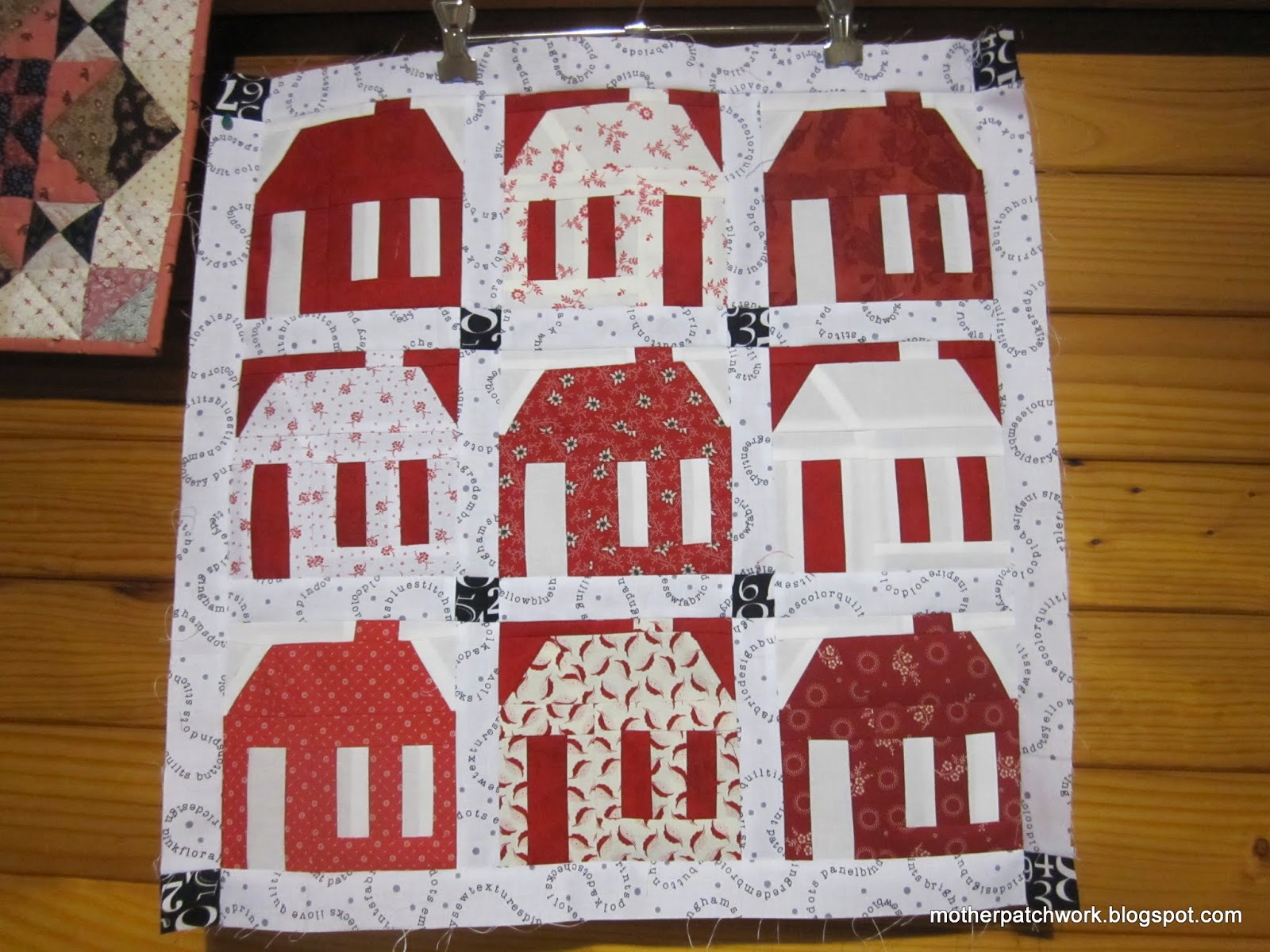 I cut backgrounds for the sunflower dresden blocks and got them sewn down, just have to make some centres. I think they are going to be cushions, but we will see. 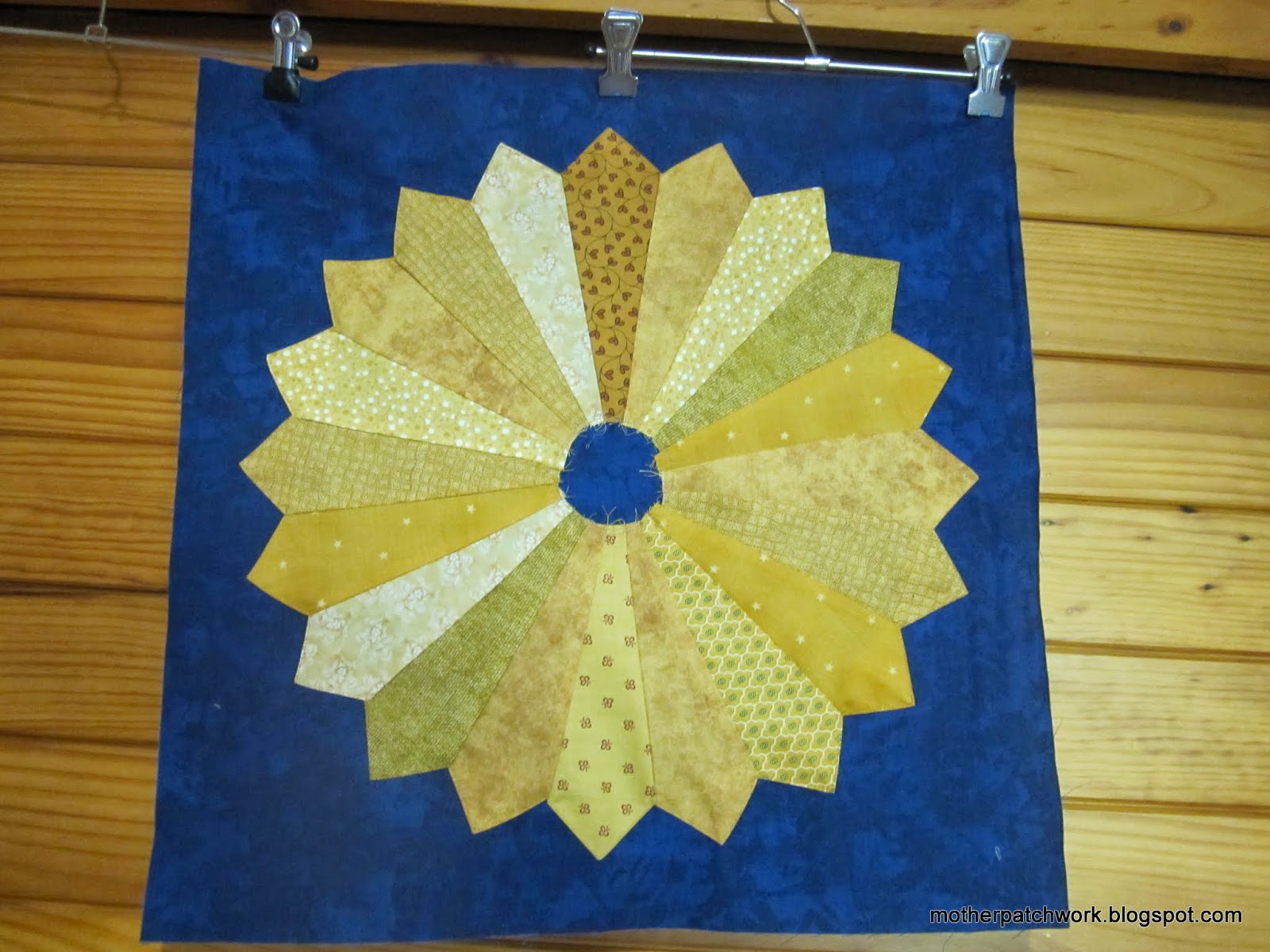 On Sunday I did another complete flip and started a whole new project.  I saw a tiny ad in a magazine, featuring a charm pack I happened to own - and had no idea what to do with. 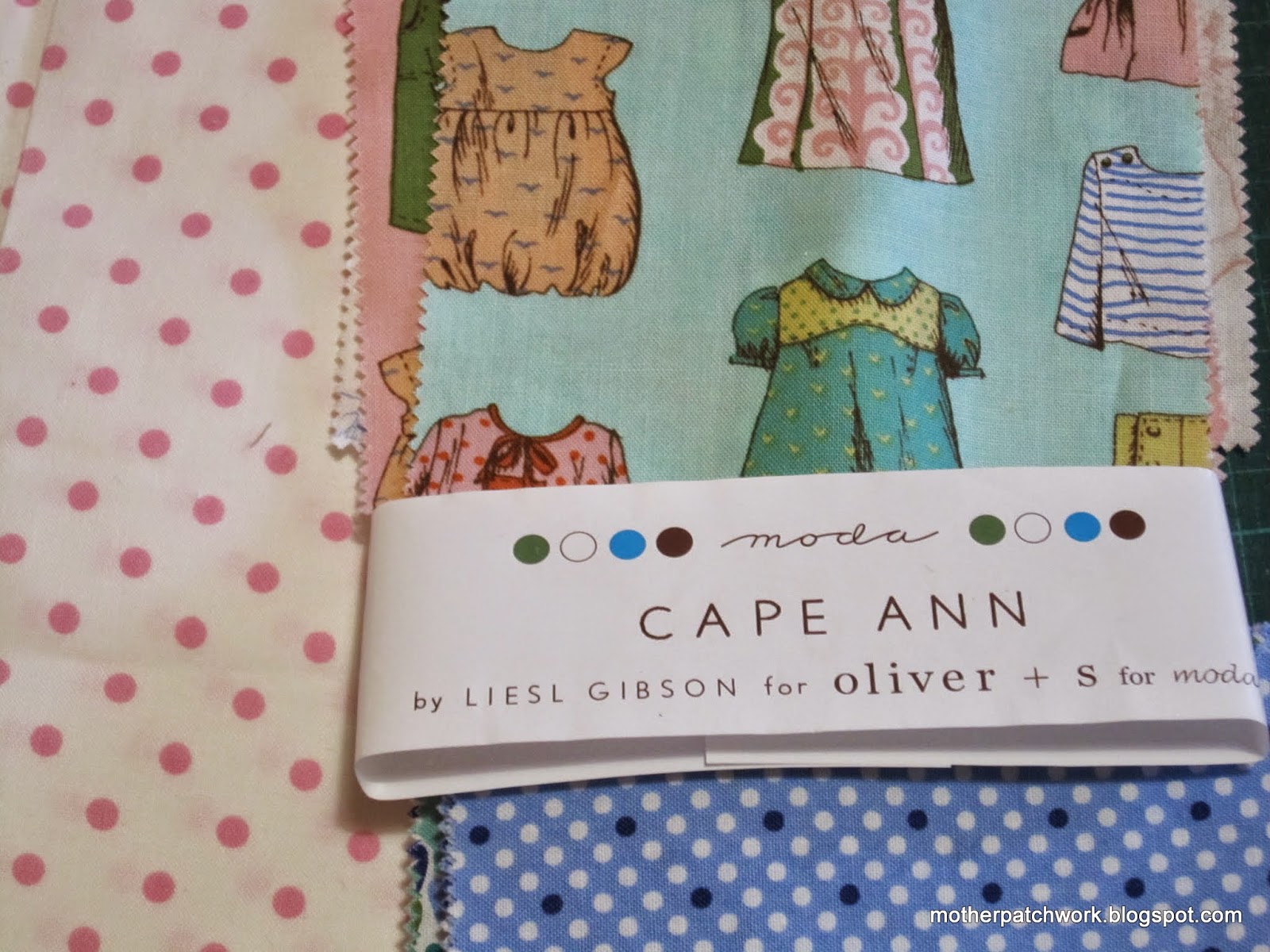 So I started cutting, love the fact there is little required and stitched away the afternoon. Added some pink/white polka dot sashing from my stash.  Then had to nip to the shops to find fabric to make a external sashing, when my stash bit ran out.  I am loving the purple polka dots and don't mind a bit that it doesnt match. 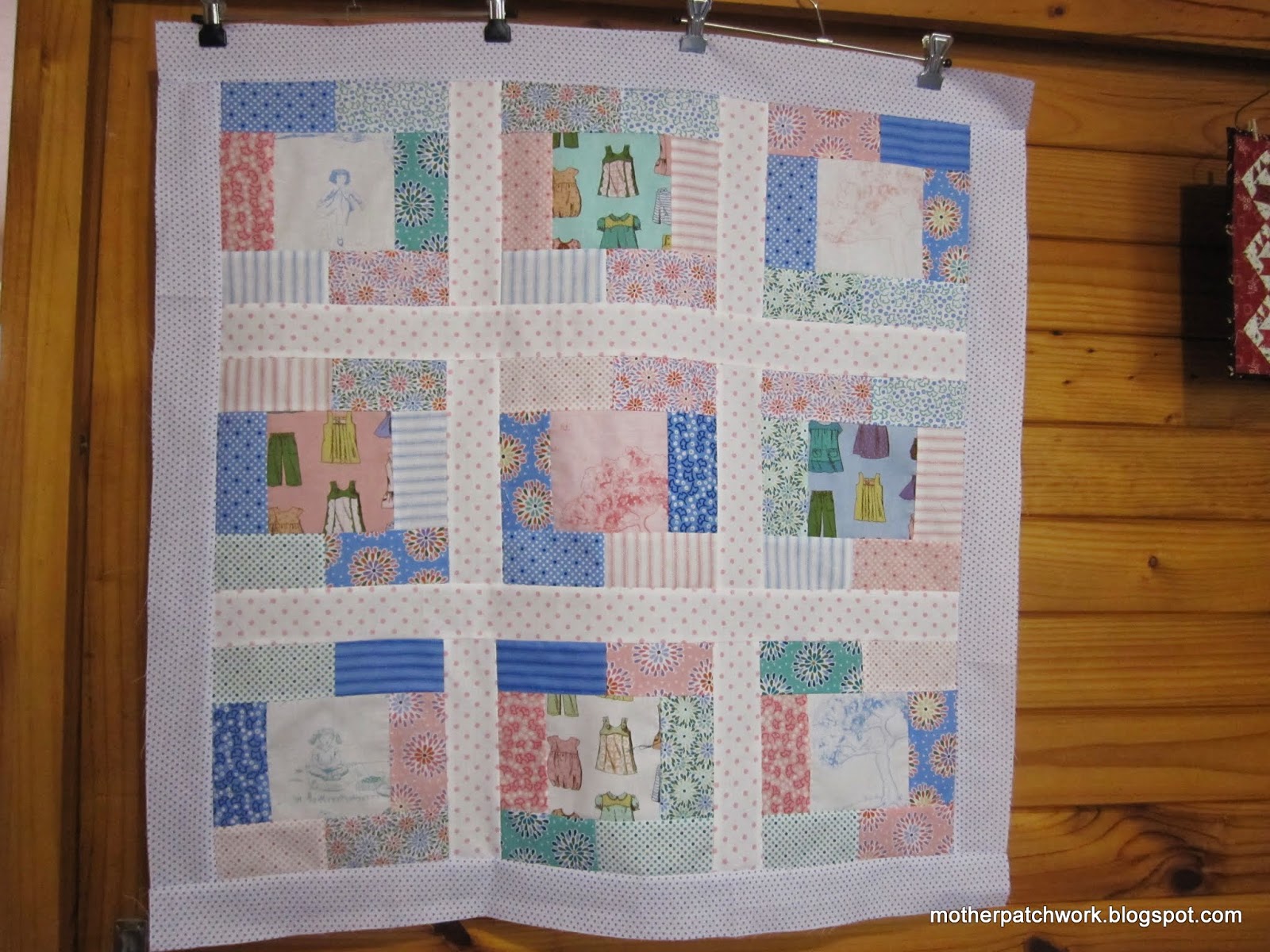 So now just contemplating if this cute cot quilt flimsy is getting a cotton or minky border.  At this stage I am thinking something warm and cuddly for the backing as well. 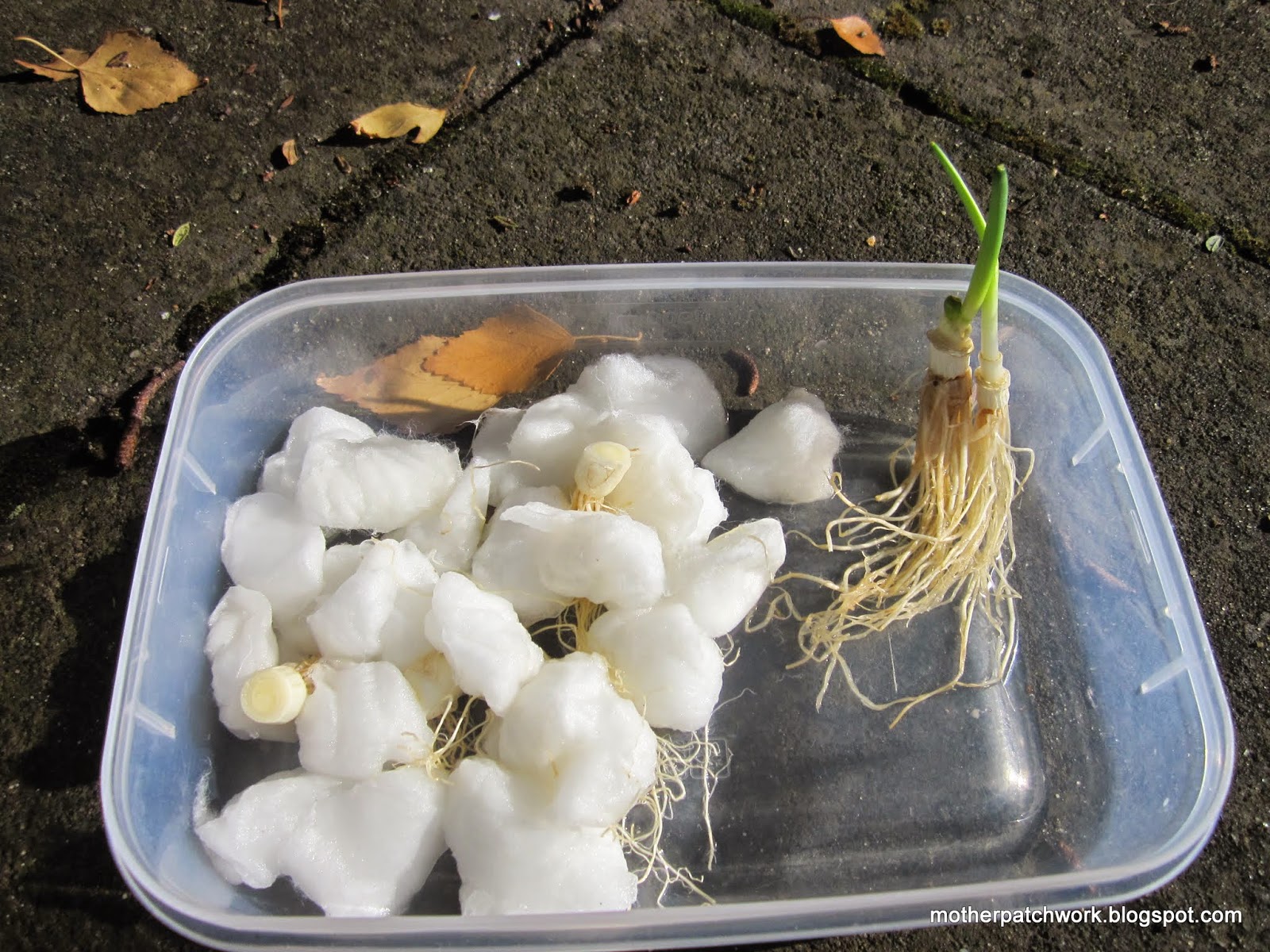 This is another attempt to lure the kids into helping me with/enjoying some gardening.  I read this tip in the last edition of Gardening Australia magazine. When you cut off the ends of the spring onions you can "plant" the root end into cotton wool, keep it moist and it will reshoot - you can see the ones that reshot on the right and the next ones I have planted on the left.  Once the roots had a couple of centimeters of green on them I planted them out into the real vegie garden.  So I am hoping that I am going to have a ongoing supply of spring onions, by just replanting the roots!
Happy quilting, Sue SA.

All day quilting - May

Yesterday we were a smaller than usual band of merry quilters, but very productive. Stacy arrived early and left for a few hours to coach her daughters netball team, but still managed to pin and start quilting this batik quilt.  In fact a few quilts were pinned, with good reason, as this week the temperature gauge in Adelaide plummeted from a lovely 30 C to a wintery 15C! 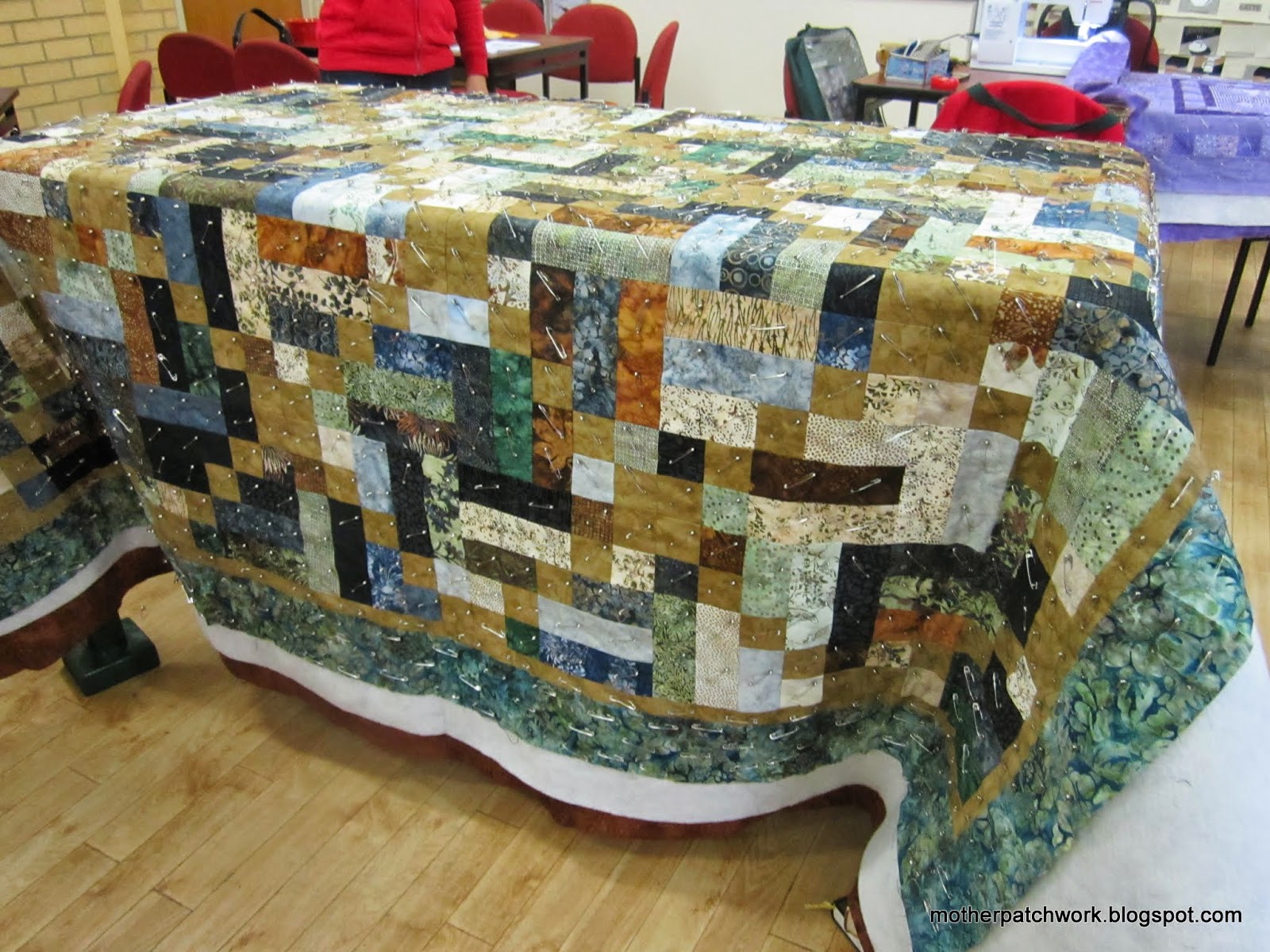 Rose showed us the lovely Sudoku quilt she has made for her son. 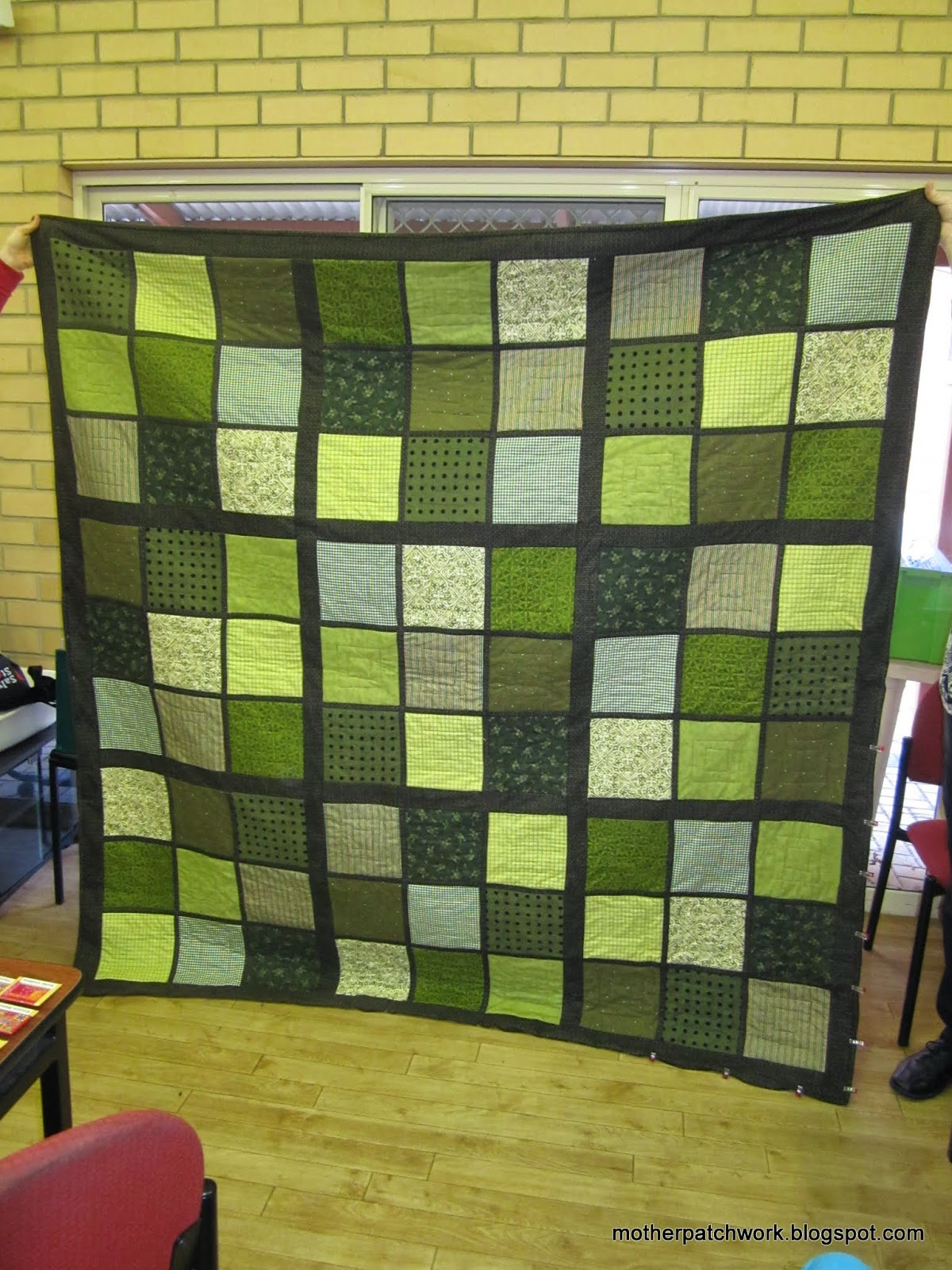 Rose spent her day working on these colourful blocks.  Sorry at the time I thought they made a great picture laid out like this, but now I realised you cannot see the full block, just the pretty colours! 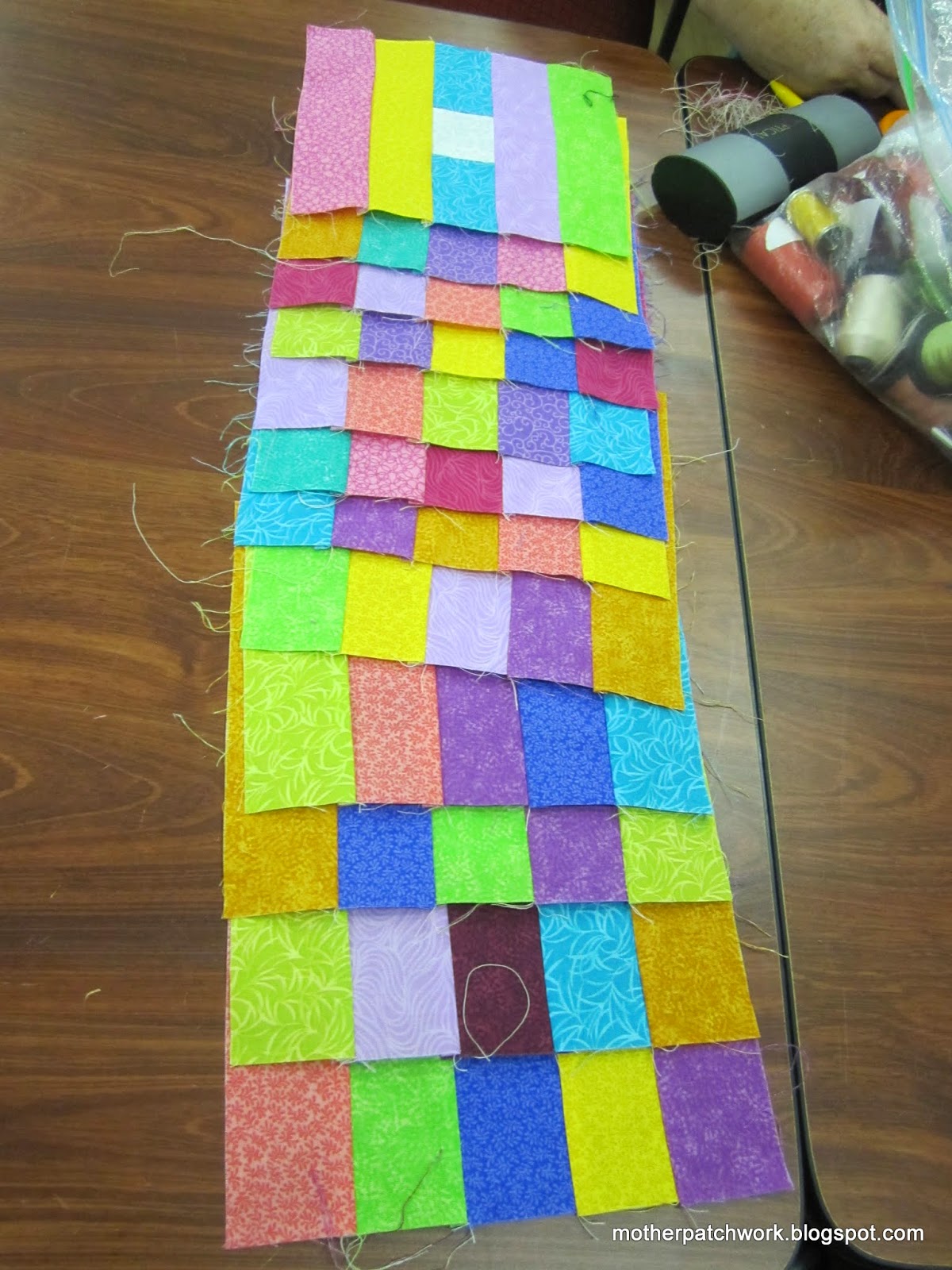 Sam and Vicki were working on the same project, which they often do.  This is Sam's swoon block. 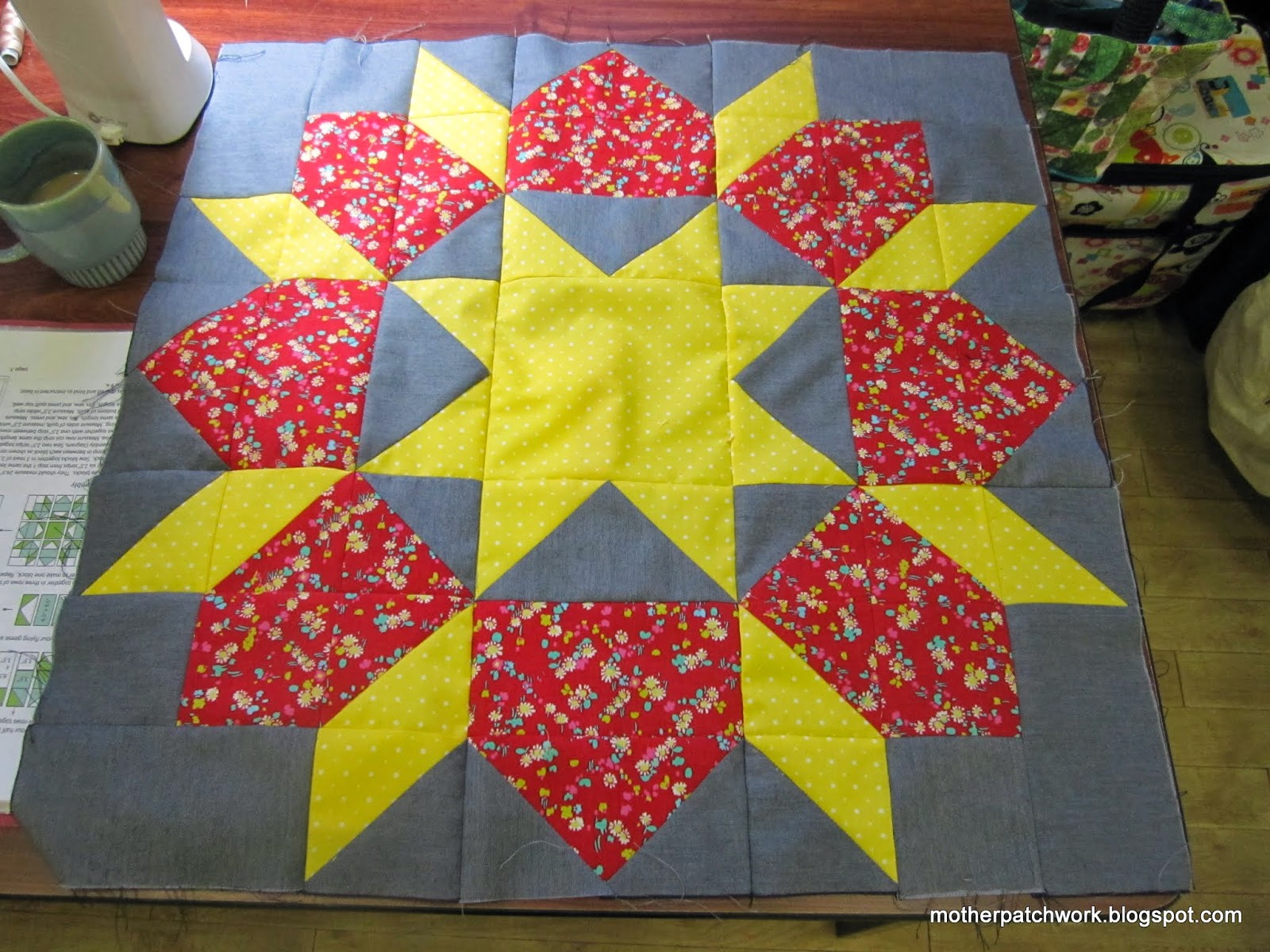 And this is Vicki's swoon block...I hope I got that right! 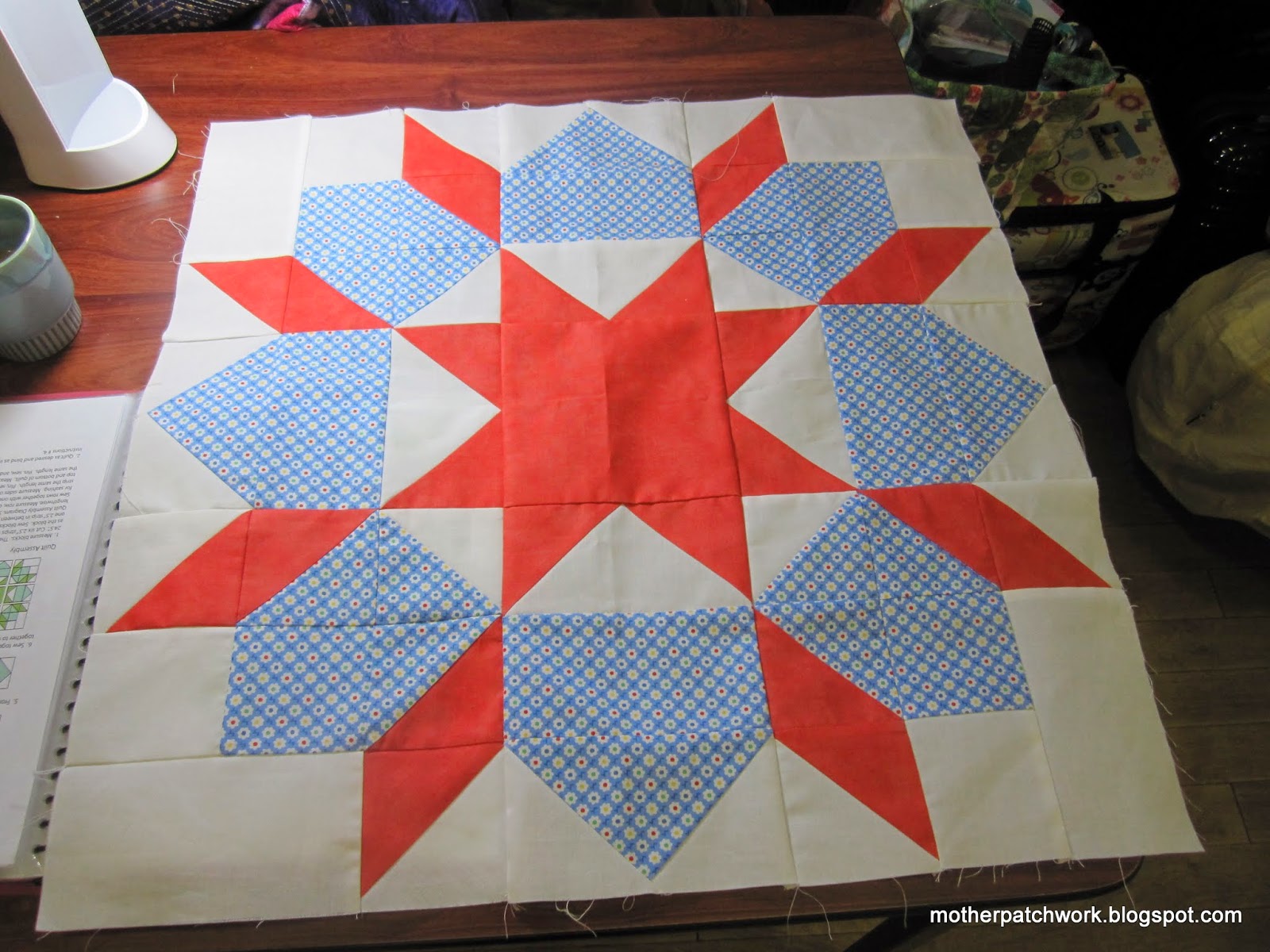 Sam showed us her completed quilt, made for a neighbour.  I am sorry I didn't take a photo of the pieced backing as it was very cleverly done.  I neglected to ask Sam where she got the pattern for this quilt, it is a very effect design and use of solids. 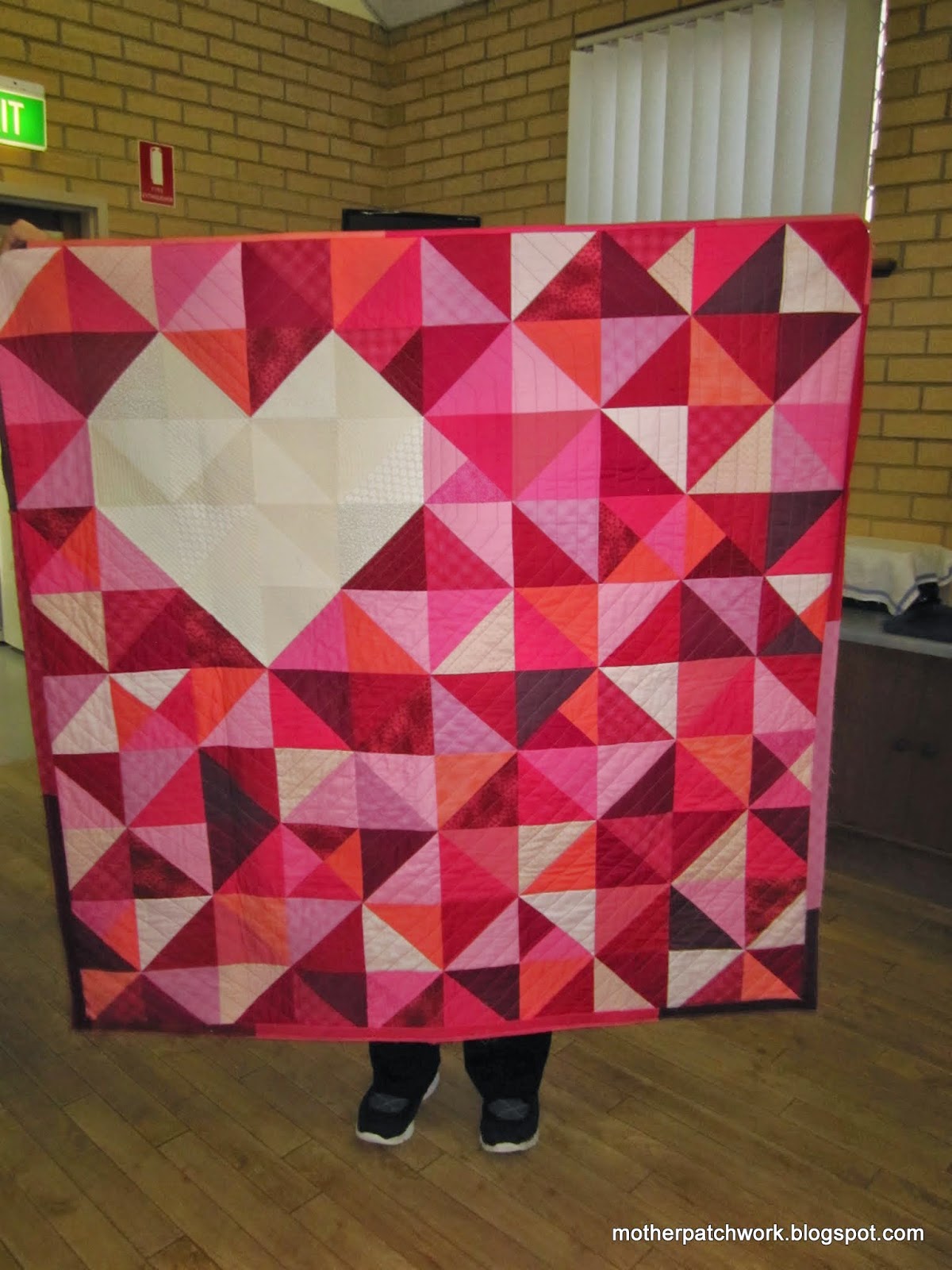 Shez was machine quilting her purple elephant quilt.  Again a great pattern, forgot to ask where it came from, sorry! 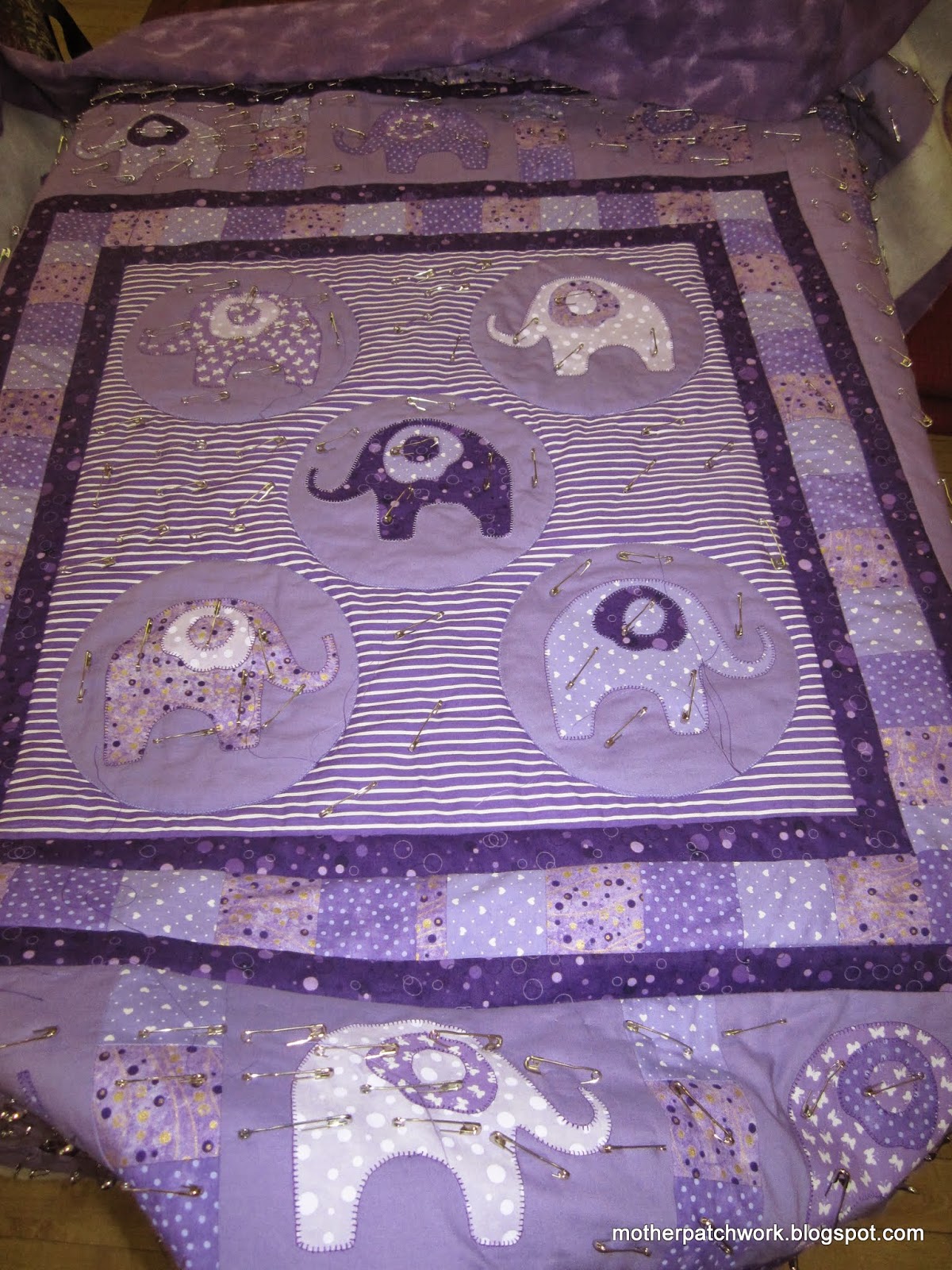 Jonelle finished off her big twister animal quilt.  Jonelle used the most gorgeous giraffe print as her border and most of the animals appear to "pop up" in the twister blades, which looked very effective. 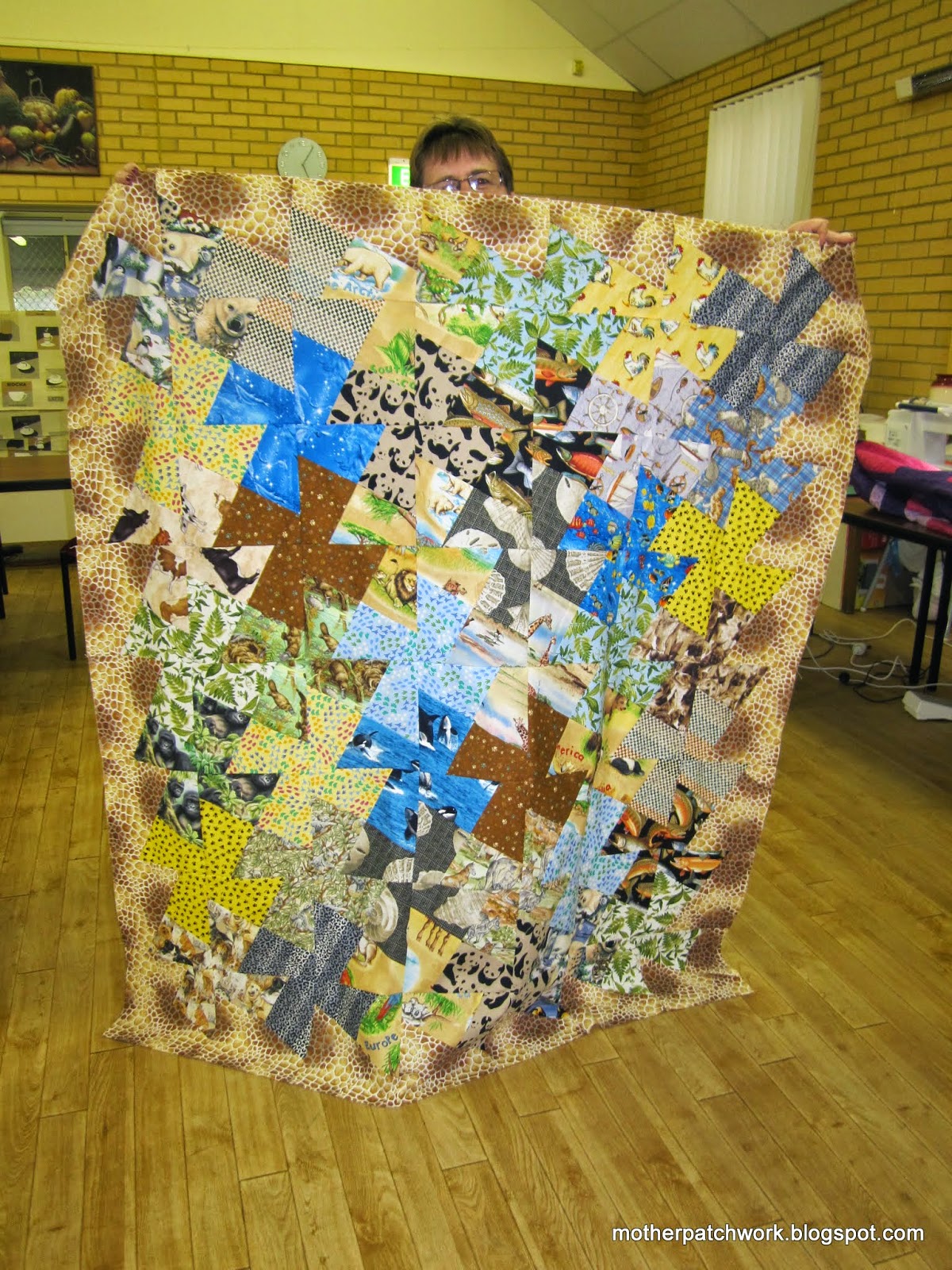 Cathy was working on some blocks (oops sorry didn't get a picture) but also was finishing off this great kids quilt.  She used her scraps to make the braid sashings and then used the trimmings to make the binding - which really sets the quilt off. 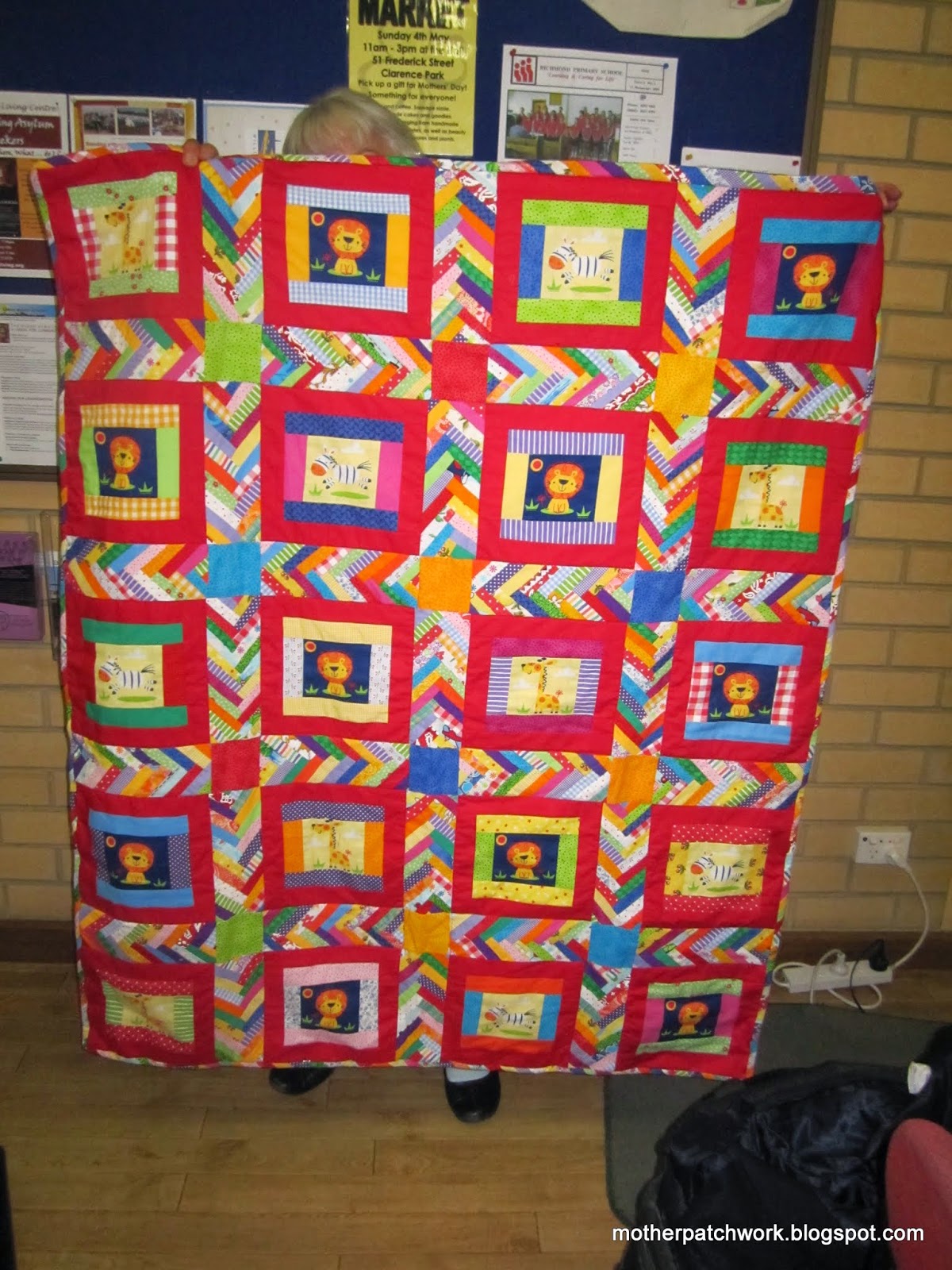 This quilt makes me want to use up some colourful scraps.  Except I have a preference for those muddy tones, which worked in my favour yesterday when I decided I just might make a Dresden Sunflower block...just because I can and it helps to use up the stash! 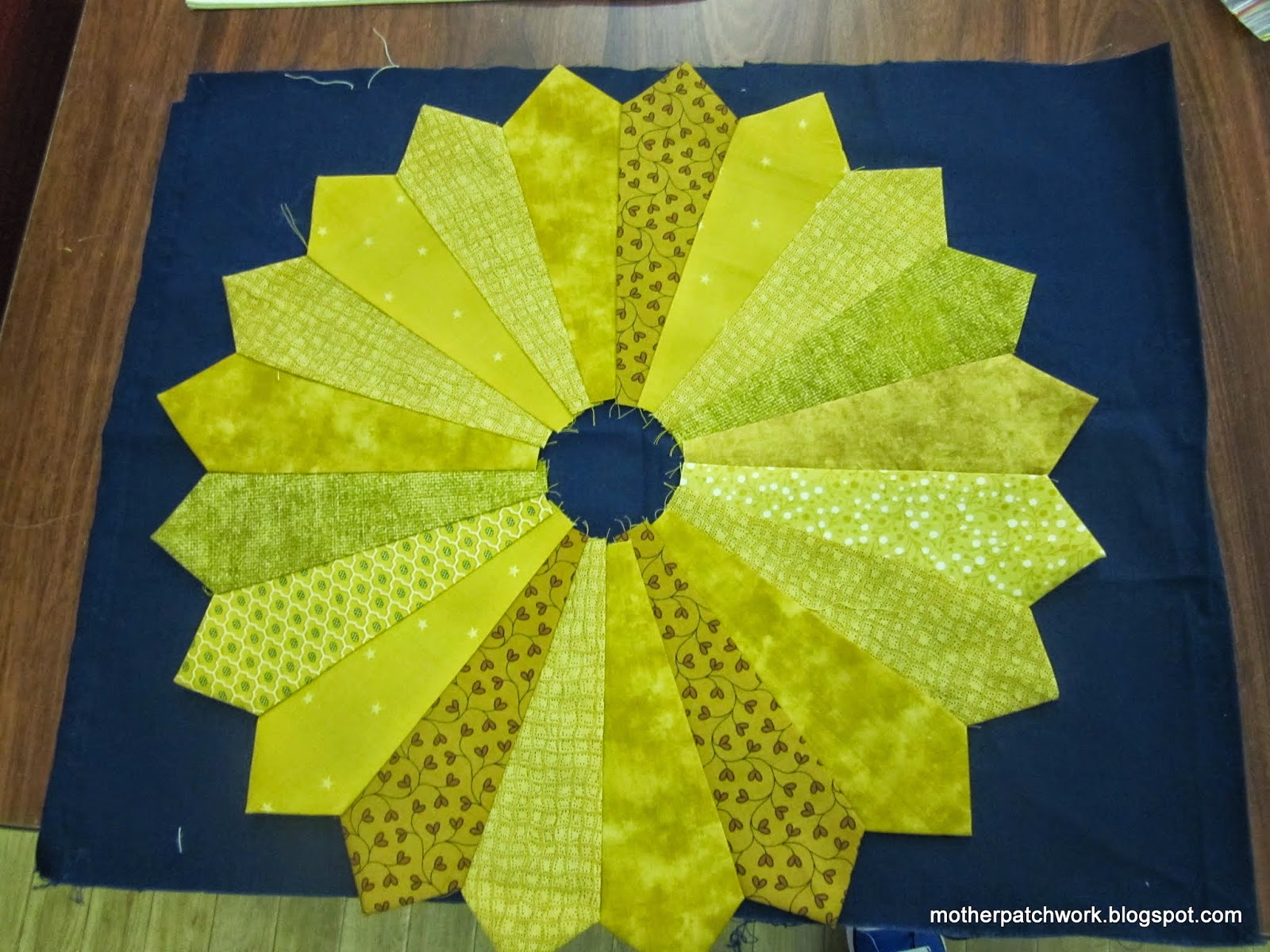 I didn't get to finish it off, as the navy background I grabbed from my stash (in a hurry) wasn't wide enough and I only had black for the centre, but then decided I really wanted chocolate brown.
Apologies that I don't have pictures of Jill's work nor of Bronwyn's, despite the fact I was sitting next to the them.  Bronwyn has a new toy - a scanning/cutting machine and she was teaching herself to use it and made some very nice shapes for applique!
Happy quilting, Sue SA.
PS special hello to Heather, hope its not too cold in eastern Victoria, please consider this the ADQ report!
at May 04, 2014 4 comments: