On Saturday LAST weekend I had 12 hours of child free sewing time with my good friends the After Dark Quilters. We start at 10 am and usually sew/talk/eat and laugh until 10 pm. People come and go during the day due to work, child, sport and other social commitments. This time we had a slightly smaller group then usual, but just as much fun. I usually try to take just one or two projects, this time I took FIVE! Not in the hope that I would finish them all or even work on them all, just because I couldn't decide...was tired from a week of sick children interrupted sleep AND variety is the spice of life!

So I started by pinning the pink Ohio Star n 4 patch quilt, made from a Moda Papillon charm pack...my first Schnibbles quilt. I quilted a few anchoring lines and then put it aside to ponder how to quilt it and also which thread colour to use. 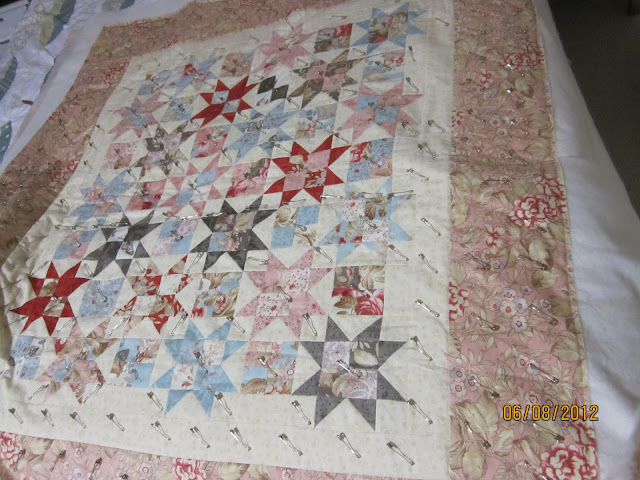 Then I added the side lime green sashing and the big blue side borders on the Dinosaurs Galore quilt. At which point I ran out of fabric. Some of the group had gone to the shop, but I had been determined to just sew and it was now closed. So that project got put aside. *sorry no up to date picture.

Hmmm...what to do next? Well I was sitting next to Heather (who taught the class for this pattern) AND I did have the Kwik Krazy Star blocks with me, and I just needed to pieced the last 12 blocks. So I knuckled down and pieced those. It was after 9 pm, we were all waning a bit when the decision was made to pack up early, so I left with just the last six to be trimmed back to 10" square. I was delighted with this effort, because the poor blocks carefully placed in the right order had been moved around the house several times while the painter and electrician were here. All the time I was hoping like crazy that the order hadn't been mucked up - but I think they look pretty good. 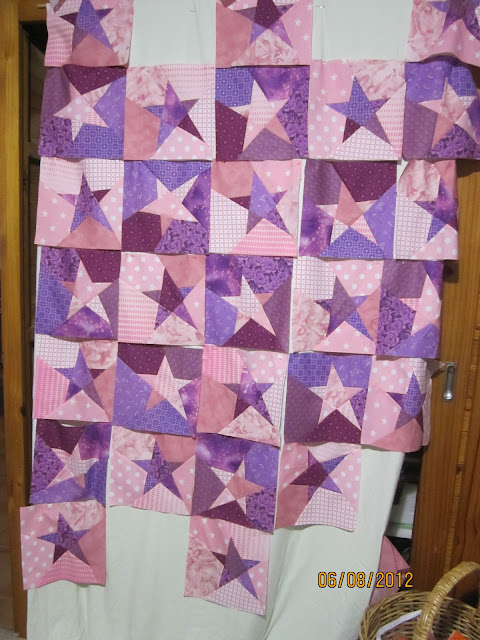 So just a bit more work and I will have two single bed quilt tops finished and ready for the long arm quilter. But in the meantime I need to do some machine quilting myself...plus lots of binding to make!
Happy quilting, Sue.


NOTE: it has taken a week to finish this post as Blogger has been playing up and I couldn't add the photos.  I have been jumping back and forth from Internet Explorer to Google Chrome, before I could finally get the draft post to allow me to copy its content and start a new one.  Most of this week I have had trouble reading other peoples blogs, they will open OK but wouldn't let me scroll down, so could only read the opening few sentences, all very frustrating!