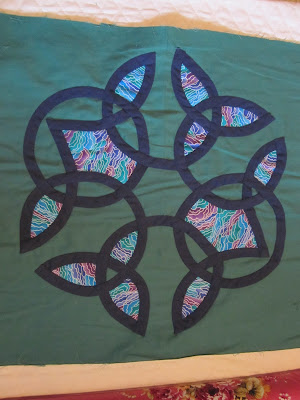 I have been working away on the Celtic quilt and have completed one block.  I think it looks good, nothing a good press wouldnt fix. 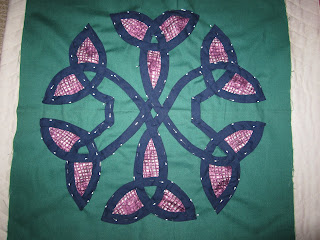 The next block is in the process of being stitched and I have cut out the backgrounds for more.  The problem with the coloured background is that its impossible to trace through.  So I have to use dressmakers carbon, whichI have only been able to buy in small sheets.  You need to then be very careful when tracing the pattern (because you have to move it), that it all matches up perfectly.

I had several attempts at making a blog banner following the tutorial that That Girl...That Quilt posted before I had sucess.   I had no idea how to go about making a banner, so the tutorial was well received, but I had to work out how to load my pictures onto Flickrfirst so it took longer then I anticipated.