I got the borders on my cot quilt, which I have decided to name Bright Stars.  This pattern came from Bonnie Hunters website Quiltsville and is called Star Struck.  Bonnie has lots of great free patterns listed, go check them out for some great inspiration! 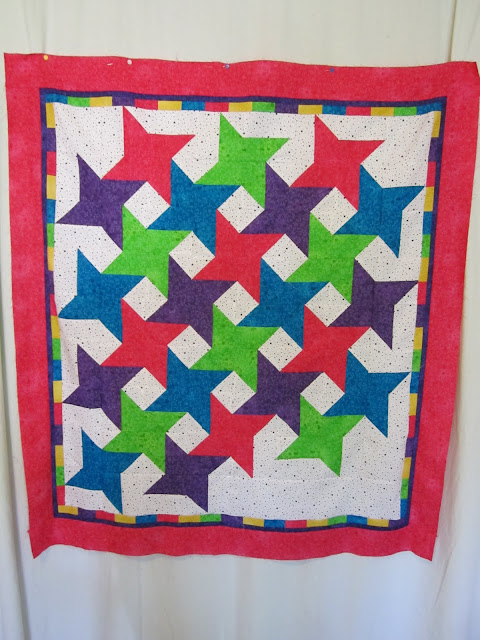 I was on a bit of a roll after that so I stayed up late and cut out some fabric for a new project!  Then today I made this bunting for DS2's up and coming birthday.  DS2 is sick so had a big nap this afternoon, hence I extra sewing time.  DS1 helped me, which involved a lot of sitting on my lap while I sewed. 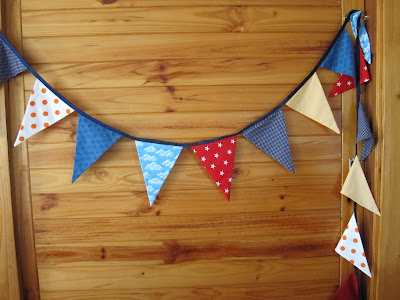 After we finished the bunting I offered to make DS1 a new pencil case.  The zip on his cheap purchased (oops bad sewing mummy!) has been broken for about a month.  DS1 picked out this fabric and I "whipped" up this...after I ejected him from my lap...too hard to stipple when he nearly had his nose on the bed of the machine. 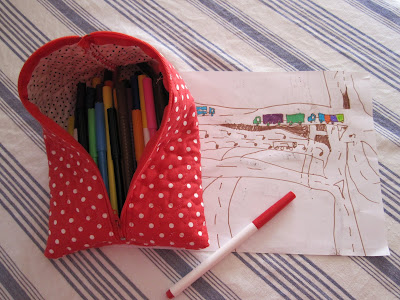 Straight after I finished this project and he said thank you (my nagging about manners is starting to pay off), he then requested that I make Peachy (soft toy) a new "blanket"!  Boy is he hard task master!  So yes I started another new project, but dinner, grumpy/sick DS2 and life got in the way.  So I just wanted to confess my new project "sins", I will start my Hail Mary's before I get into bed!
Happy quilting Sue.
at June 21, 2011