Unfortunately there was only time for a quick inside photo of the finished ladybird cot quilt before I drove to Geelong to deliver it.  The recipient, Miss Ivy is very sweet, just 9 weeks old and so placid.  Her parents live in Perth, so we won't see her often, so all the more reason to give her a floor quilt to enjoy. I think straight line quilting on the diagonal is going to be a favorite for awhile. 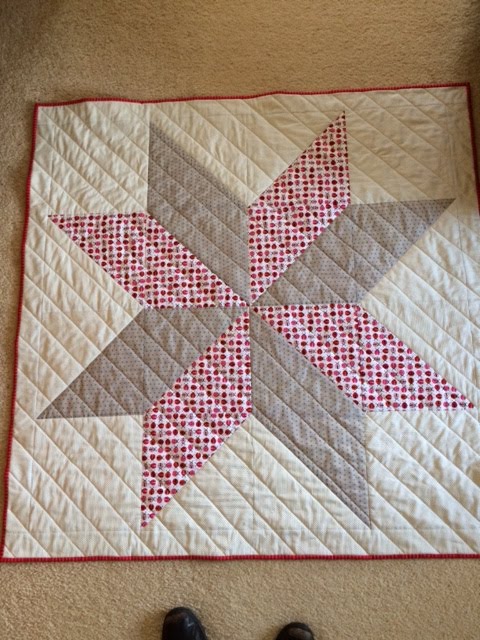 I used the Hera marker on the last quilt, but this fabric did not take the markings as well.  So I had to resort to a Frixion pen, which I then ironed off (weird but it works) and then I gave the quilt a good wash to make sure it was all gone.  I also wanted to make sure the gorgeous raspberry red striped binding did not run.   I used flannel on the back of this 42 x 42" quilt, as it was just that bit wider and saved me having to join the backing.  I find flannel backs cling to the carpet, so think it makes for a better floor quilt. 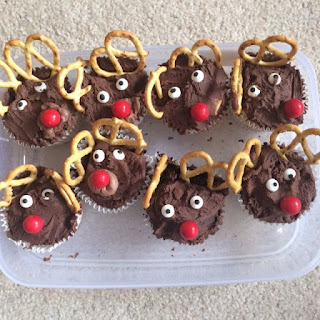 Our oldest son has been a reluctant baker now he is in his early teens, come to think of it, he is reluctant to do most things that involve work!  However this semester he has slowly warmed up to cooking class at school and come home with some yummy treats. The final class they made cute reindeer Christmas cupcakes and he was so proud of himself !  As a added bonus he was suddenly  very popular with the other kids on the bus! 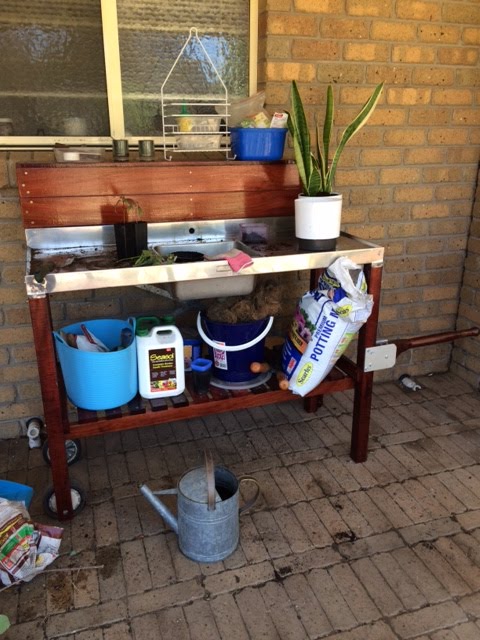 This is a early birthday present that my father made me.  I requested a potting bench made from a second hand sink, so that it could double up as a bar/bench when we are cooking in the gazebo because the stainless steel will be easy to clean off.  Dad decided to make it from red gum, which is a heavy wood and my other request was that it had wheels so I could easy move it.  So he decided it needed wheelbarrow handles and two wheels (recycled off a old lawn mower).  I didn't want the handles to stick out and get in the way, so he made them so they fold down when not in use...genius! He had only just delivered it, when I put it straight to work, potting up a indoor plant and some fuchsia cuttings.  I purchased two small fuchsias for $3 each and pinch the tops off when I planted them in the shade house.  I put the cuttings in water and they grew roots, so I have just potted them into little pots and taken a second lot of cuttings from the original plants, which are growing well in the shade house!
Not a lot of sewing happening here, as I start preparing for Christmas.  We are hosting Christmas (20 people) this year, which will include members from both sides of the family for the first time.  I have to start baking soon, but first I need to start cleaning...unfortunately the oven is at at
the top of the list!
Happy quilting Sue.
at December 13, 2019