Urrbrae House and a New Sister

I am running a week behind in my blogging, this is some of what we did last weekend and I meant to share Sunday.  I love visiting historical homes and now the kids are a bit older (ie less likely to break anything) I thought it was time to take advantage of the Open House program running, where heritage properties were open to the public. 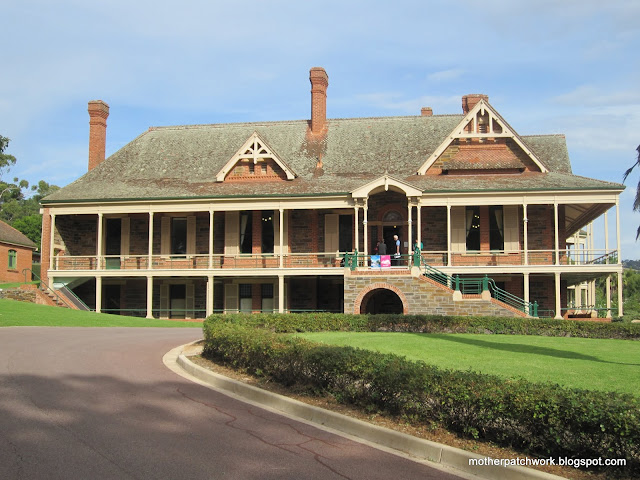 This is Urrbrae House, (Cross Road, in the suburb of Urrbrae) and the house was built by Peter Waite and then later donated to the University of Adelaide.  This is the front foyer looking up the stairs to the Minstrels Gallery. 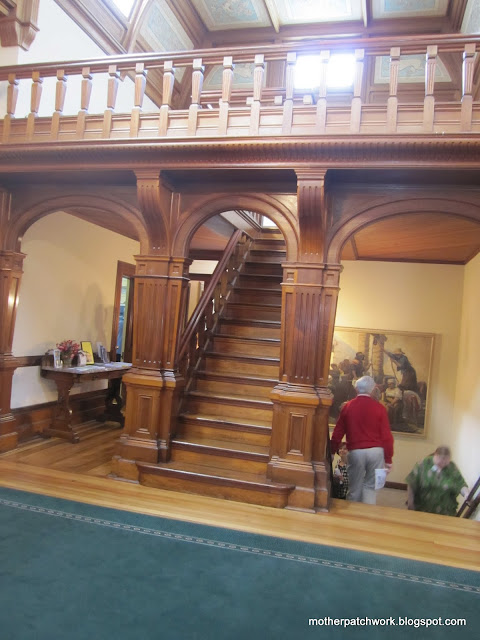 The timber work was beautiful but the ceilings were extra special as well. 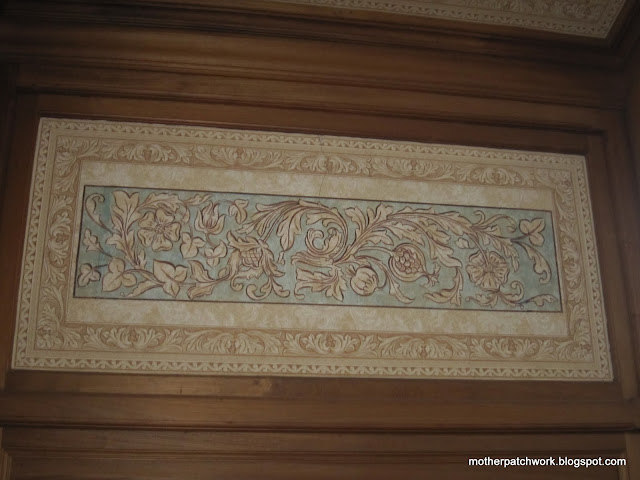 I guess the reason I like anything "old" is that there is so much intricate detail.  This is Peter Waites monogram carved into the sideboard.  Looks like a Dresden Plate or EPP Clam shells to me! 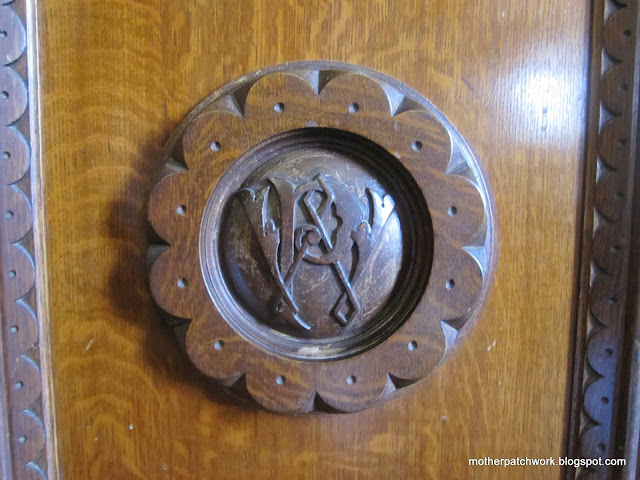 Off all the rooms the Library was my favorite for its wood panelling, book lined shelves and these original chairs...which look like the perfect hand sewing chair to me! 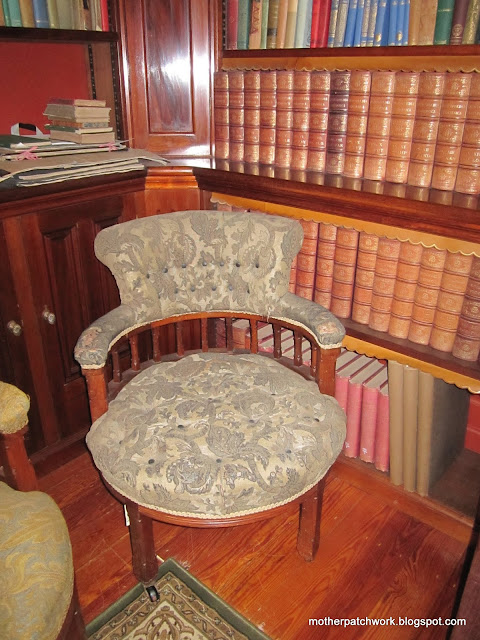 The house was decorated by Aldam Heaton who was a contemporary of William Morris...so the interior must have been very beautiful in its day. 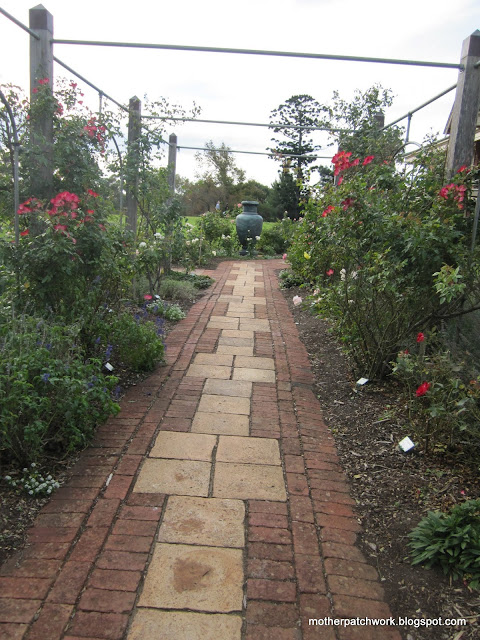 The current staff could be very proud of the gardens, they were lovely, I am especially fond of arbours.  I am not a rose person, but I was tempted by some on display, purely because of the gorgeous shade of magenta purple.  I am hoping this is the right label, as we are off to the nursery today! 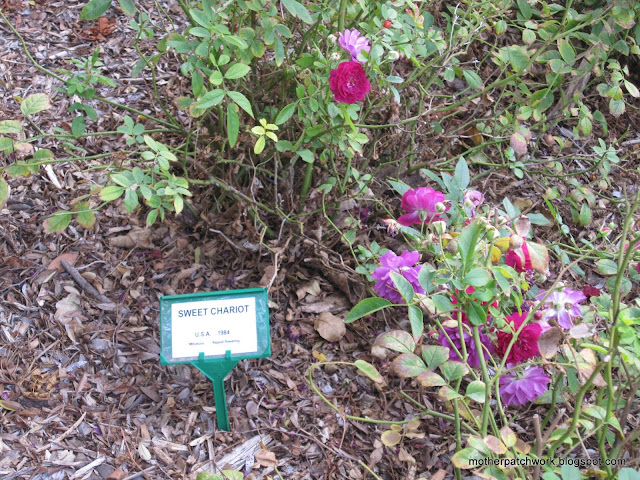 I would love to have a pond in my garden (with fish), or some sort of water feature I especially loved this one surrounded by the flagstone edges and the soft woolly leafed plant called Lambs Ears. 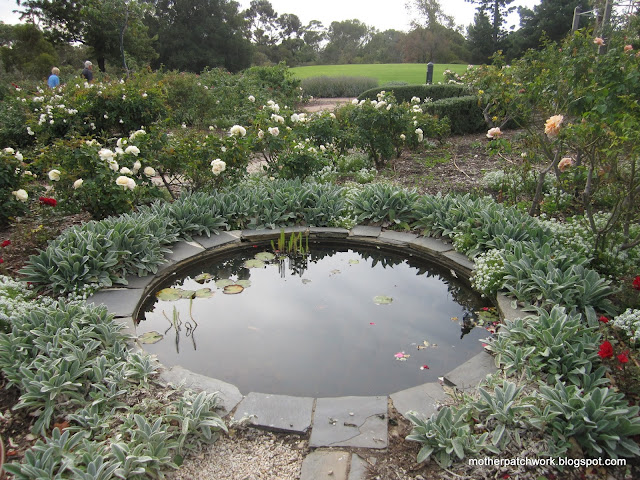 This is one side of our recent mini garden make over.  Nothing on the grand scale of Urrbrae House, and the sand pit isn't exactly where I would like it, but it is still in use, so remaining for now. 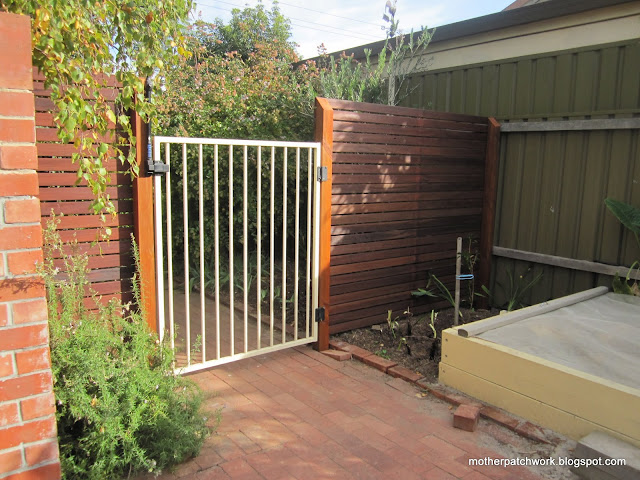 My husband built this fence, which was previously erected elsewhere and "fenced in" nothing.  It now stops the kids getting to the front garden.  Work has started on the front garden, but alas no planting yet, just lots of digging and safely moving plants so a wall can be repaired.  My intentions were good when I loving moved these bulbs and the Camellia.  I thought they were the bulbs for the gorgeous dainty Maltese Cross plant and was very excited.  But no a gardening wise friend popped over and announced (cos they lack leaves) that they were Agapanthus!  Insert eye rolling, tongue poking and hair pulling.  I spent a lot of time potting up the bulbs I couldn't fit in the garden thinking I was in for some pretty flowers in spring, but no boring, common old Aggie's.  Blah!  I now have some of the Mums from School coming around to take the excess of my hands.  I want dainty girly flowers in my new garden!  Looks like I will have to wait until next autumn to plant some real bulbs. 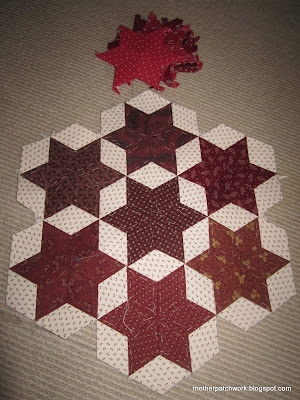 You have been very patient and thus will be rewarded with two quilty pics.  I have finished making the Madder Red Sister and pieced all the red stars, now just have to make their shirting diamonds and join them up.  This is the progress on the blue and white reproduction nine patch quilt (now to be called the BAWRNP!), which was going great guns, until I realised that I had just enough fabric left to cut the setting triangles along the sides, but NOT for the four corners.  So I just need a fat quarter of this Primitive Gatherings cream print (with the cute leaf wreath on it), cos I had previously brought the rest of the bolt of at Hettie's Patch...but if anyone has a scrap to spare?  I already checked out two quilt shops here in Adelaide and off to another two this morning to see if they have any in stock, fingers crossed! ;) 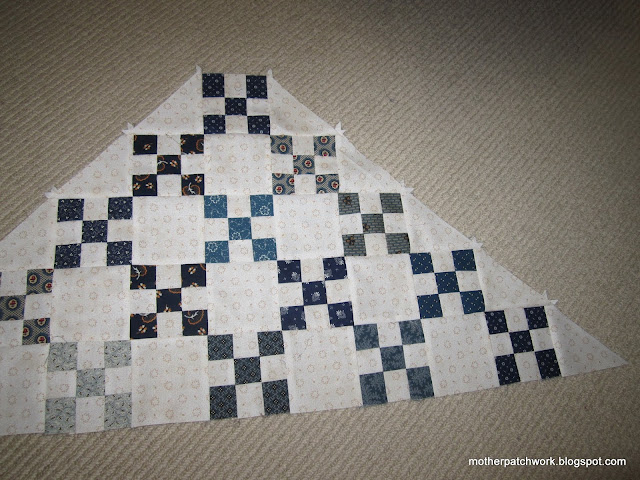