I managed to spend most of the day in my sewing room on Sunday. I haven't been able to settle into sewing for any extended period for awhile now as domestic duties have been taking precedence. So I was really pleased to be able to sew the border on the French general lap quilt.  I couldn't find any yardage of the French General at my local shop (and I was in a hurry) so I went with this lovely cream floral on latte brown.  I tried lots of reds, but they didn't work, but I think a red binding will really finish it off.  Now to just get it basted and quilted...any ideas about patterns?  I really want to avoid stitch in the ditch and straight lines, I need to get out of my comfort zone, this quilt deserves better! 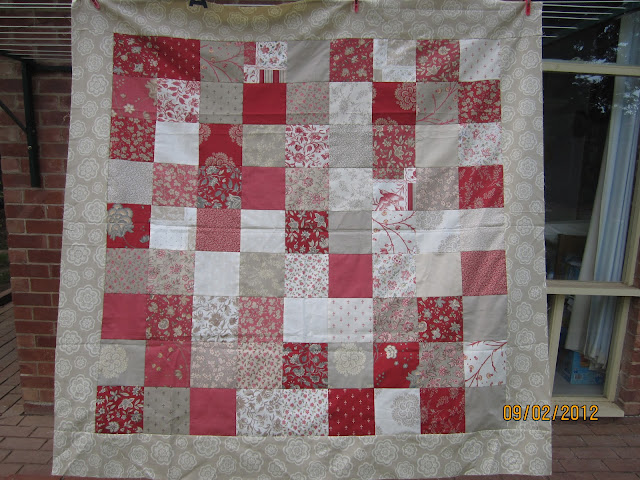 Next, out came the  Pink n Yellow l'Twister cot quilt.  I really wanted to do some fancy free motion quilting , but everything I tried looked awful. In the end I went with stitch in the ditch, which is fine, but not as exciting as it could have been.  I also stitched 1/4 of an inch inside the pin-wheels on the borders and the odd one in the quilt...but that was as far as I got, too slow! As I want to make another of these quilts I will have to investigate some alternative quilting patterns on line, surely there is some way to get a bit of "movement" on this pattern, that will make it stand out...not that the yellow doesn't already scream "look at me"! 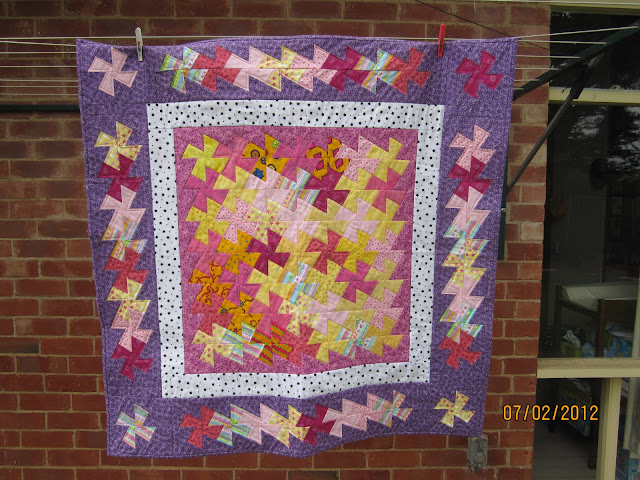 Then after three days of terrible interruptions to our Internet connections I finally gave up hope of checking  blogs (or posting) and headed back to the sewing room to face up to the Celtic Quilt.  It only needed the last three blocks squaring up...but I had been avoiding doing this as I had borrowed a friends 18" square for the squaring of the other blocks.  But I managed it with my long and short ruler, taking a deep breath and not rushing.  So then it was simply a matter of sewing on the last two rows and the remaining corner triangles.  To think this quilt top is finally finished is a big relief to me, I was feeling guilty that I had missed my previous self imposed deadlines. 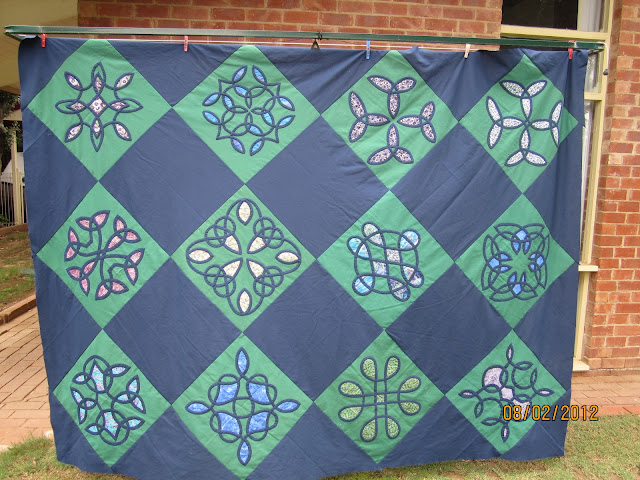 I just need to piece the backing and then its off to the long arm quilters.  My long arm quilter, Elaine is booked up at present, finishing a commissioned quilt...she has designed, pieced and is nearly ready to custom quilt it...and its king sized!  Hopefully the Celtic will be at the front of the line for quilting in early March. In the meantime I have been oohing and aahing over the quilts in this book, given to me by my friend Kylie.  I had never brought any of the pre cuts available until I brought two charm packs back in November.  And as you can see by the French General quilt, I was lacking in ideas as to what to do with one!  In a few weeks I have "all day quilting", 12 hours of stitching, eating, laughing and general quilty fun.  I am hoping to start something from this book and/or something off the wish list!

Already the pressure of one project a month - theme based on the season or month is weighing heavily on me!  I already have a heart cushion and mug rug, so I trying to find something to make (quickly!) that fits into the February theme that's not St Valentines day!  So I am signing off to go searching for pictorial stimulation and free patterns out there in blog land, happy quilting, Sue!
at February 09, 2012